A remarkable find by the Hubble Space Telescope: pollution in the form of Carbon Dioxide on a planet in another solar system. 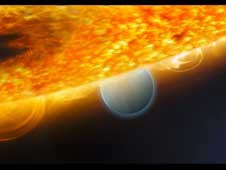 NASA's Hubble Space Telescope has discovered carbon dioxide in the atmosphere of a planet orbiting another star. This breakthrough is an important step toward finding chemical biotracers of extraterrestrial life.

The Jupiter-sized planet, called HD 189733b, is too hot for life. But the Hubble observations are a proof-of-concept demonstration that the basic chemistry for life can be measured on planets orbiting other stars...

...Organic compounds also can be a by-product of life processes and their detection on an Earthlike planet someday may provide the first evidence of life beyond our planet.

In related news Al Gore demanded that the United Nations launch a probe immediately "to determine whether SUVs, Hummers or muscle cars are to blame for this outrageous pollutant."

China and India were heard chortling in the back of the room.
at 9:21 PM
Email ThisBlogThis!Share to TwitterShare to FacebookShare to Pinterest
Labels: Climate, Gore, Scitech