You say the Democrats were wrong about minimum wage laws? I'll alert the media. 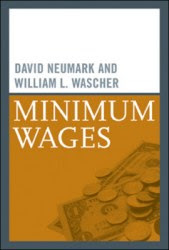 To add insult to injury, the MIT Press just published a book by David Neumark and William Wascher, which is the first recent and comprehensive overview of the evidence on the economic effects of minimum wages (hat tip: Ed Morrissey). Their conclusion lays waste to the liberal contention that minimum wages help the poor or underemployed.

Arguing that the usual focus on employment effects is too limiting, they present a broader, empirically based inquiry that will better inform policymakers about the costs and benefits of the minimum wage.

Based on their comprehensive reading of the evidence, Neumark and Wascher argue that minimum wages do not achieve the main goals set forth by their supporters. They reduce employment opportunities for less-skilled workers and tend to reduce their earnings; they are not an effective means of reducing poverty; and they appear to have adverse longer-term effects on wages and earnings, in part by reducing the acquisition of human capital. The authors argue that policymakers should instead look for other tools to raise the wages of low-skill workers and to provide poor families with an acceptable standard of living.

Just to recap, the Democratic Party's incessant cries for increasing minimum wages:
One of these days the Democrats have got to get a policy position right. I mean, they're due!
at 9:21 PM
Email ThisBlogThis!Share to TwitterShare to FacebookShare to Pinterest
Labels: Democrats, Economy