Progressives want a $45 Billion Bailout for the Telephone and Cable Monopolies!


Progressive communications group FreePress is lobbying President-Elect Obama for a $44 billion bailout aimed primarily at the telephone and cable monopolies (PDF). The money would ostensibly be used for various incentives to build out broadband connections to underserved areas such as rural locations. 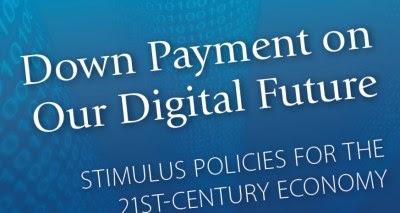 FreePress calls the $50 billion in taxpayer money a "down payment on a digital future." But what it really appears to be is a duplicate set of payments to the telephone and cable companies for infrastructure they promised to build years ago.

Given the fact that the carriers are government-regulated, possess virtual monopolies over their territories, and spend hundreds of millions lobbying, I like to call them the Fannie Mae and Freddie Mac of communications. 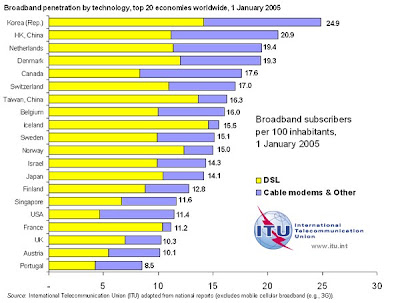 Telecom analyst Bruce Kushnick opposes the $44 billion bailout for pragmatic reasons. First, he asks how anyone can advocate raising taxes "to bail out the same companies that failed to properly upgrade America’s essential infrastructure"? Second, he asserts that Free Press ignores accountability for the carriers and even a discussion of how the U.S. ended up a broadband backwater when compared to other countries. 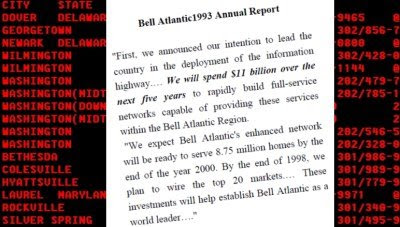 FreePress fails to mention that AT&T, Verizon and other carriers, ostensibly the caretakers for our current networks, have failed to live up to their commitments for broadband build-out. AT&T, for example, now controls the telephone networks for 22 states (including California, Florida, and Illinois). AT&T promised to have 19 million homes wired with fiber by 2007 and, instead, as of January 2009, it will have completed less than one million homes. 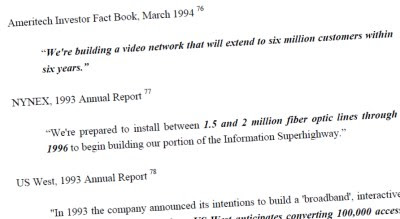 FreePress also ignores the roughly $280 billion in fees and tax breaks already collected by the telcos: "[o]ver a decade ago, the phone companies made commitments to rewire the country state-by-state. In virtually every AT&T and Verizon state, the company should have been completing rewiring of the states by 2010 as they have already received and continue to receive billions per state in tax incentives or higher phone rates." What the telcos promised for billions in fees and tax breaks were entire states wired with fiber capable of 45 Mbps. What states received, for the most part, is DSL over copper (usually at speeds one-fiftieth of what was promised). 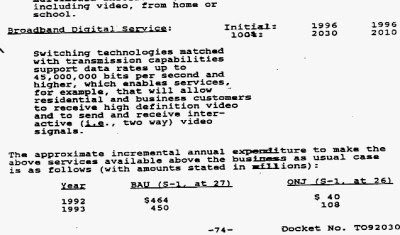 For example, here’s a page from the New Jersey state law giving a timeline through 2010 and showing that 100% of the state would be completed with 45 Mbps fiber.

In state after state, says Kushnick, regulators approved incremental taxes, fees and tax breaks for the telcos in exchange for broadband deployments that never came. Instead, the telcos pocketed the extra profits and never upgraded their networks as promised. Kushnick says this same pattern was repeated in Illinois, Massachusetts, New Jersey, California, Iowa, Texas, Ohio, Wisconsin, Pennsylvania, Connecticut, Maryland and other states. Kushnick calculates the total amount in extra revenue received by the carriers for non-existent broadband at roughly $280 billion!

Instead of questioning the telcos about the roughly $280 billion taxpayers already spent on failed broadband deployments, Free Press wants another $45 billion bailout for the telcos. I can just see the lobbyists slobbering now. 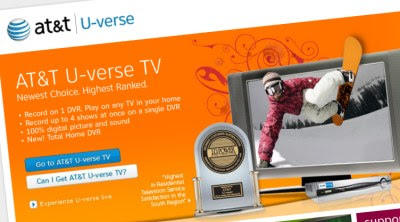 Furthermore, FreePress claims it wants open networks and competition but doesn’t address the current state. Verizon's FiOS and AT&T's U-Verse are "closed to competition... [the] customer can not choose to use independent ISPs, for example." Kushnick asserts that If FreePress really cared about open networks, it would advocate rewriting laws to ensure competitive line sharing and network wholesaling, which have been enormously successful in other countries.

Finally, FreePress also wants to increase tax rates for the Universal Service Fund (USF). But independent studies of the USF call it the FCC's "biggest boondoggle". Kushnick characterizes it as an "out-of-control slush fund" with little to no oversight. Free Press proposes a $26 billion dollar tax increase over a 3 year period. And the USF fund is already an "11.4% tax on all ‘interstate’ services [and would] more than double, if not triple the taxes." 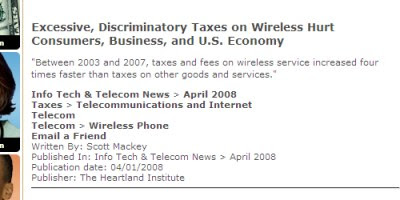 As citizens, we should: FreePress may have some good ideas (like net neutrality), but higher taxes and subsidies for monopolists aren't among 'em.

Linked by: Michelle Malkin, Say Anything, Flopping Aces. Thanks!
at 10:41 AM
Email ThisBlogThis!Share to TwitterShare to FacebookShare to Pinterest
Labels: Democrats, eBusiness, Economy, FCC, Mobile