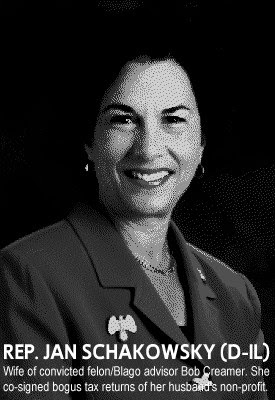 That would appear to be none other than Rep. Jan Schakowsky (D-IL, what else?). An anonymous tipster pointed me to a fascinating post at Red County. It describes Schakowsky's sordid unique background. Her story would be shocking, appalling, perhaps even the lead story on the national news -- were she anything but an Illinois politician. 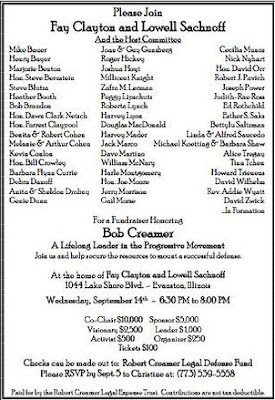 Hubby's ties to other sleazy pols

• By any measure, Schakowsky is one of the most liberal (if not the most liberal) members of Congress. She belonged to, for instance, the "Progressive Caucus," where she joined the likes of Cynthia McKinney, Maxine Waters, Dennis Kucinich, Jim ("Baghdad Jim") McDermott, Bernie Sanders and Lynn Woolsey.

• After her husband's conviction, Schakowsky implied that her husband's prosecution was politically motivated: "Schakowsky referred to herself as one of the major critics of President Bush and Ashcroft and said: 'I do think the timing is somewhat curious.'"

• Rep. Schakowsky authored a 2009 earmark for another Chicago-area nonprofit called The Save A Life Foundation (SALF), which is described on her website as a "Community Response Systems Initiative". What the... ? 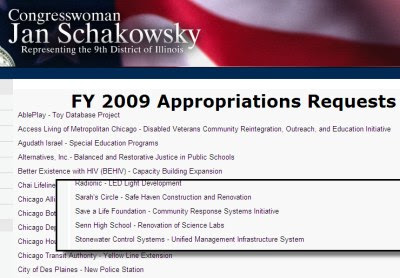 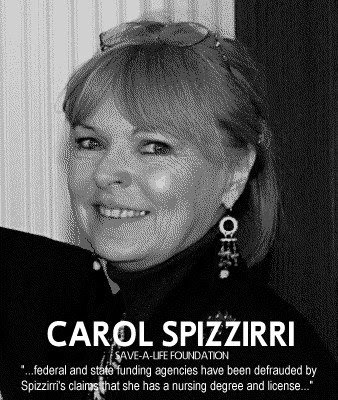 • A subsequent ABC investigation in 2007 revealed more problematic activities linked to Save-a-Life and possible misuse of public funds. These include allegations by a temp worker that state funds were used to reproduce a copyrighted 600-page instruction manual that Save-a-Life would then edit and claim as its own.

• ABC also noted that the American Red Cross "recommends the opposite of what Save-a-Life teaches school children for emergency response."

• In light of the two ABC investigations, most public funding sources for Save-a-Life appeared to dry up.

That is, until Jan Schakowsky got involved.

Shouldn't she be investigating SALF, not funding them?

• Red County asks the salient question: given her investigatory committee roles and her own problematic history with non-profits, "why is Rep. Schankowsky carrying an earmark for The Save A Life Foundation rather than investigating them?"

What is it with Illinois? Something in the water? In any event, pass the popcorn, Nahanni.

Update: Creamer, Schackowsky's husband, is routinely given a column of honor at Puff Ho, though -- for some reason -- his felony conviction is omitted from his bio.

I've read quite a bit of information that calls into question the leadership, mission and spending of the Save-a-Life Foundation (SALF), which is listed as one your '09 ARs.

Could you please describe:

(a) your rationale for this request; and
(b) any ties between SALF and yourself, your family members, staff, lobbyists or business partners?

Thank you. Have a wonderful and safe New Year.

I'll let you know what I hear.