A freezing rain caused roughly 300 accidents in the metro area this afternoon. During the three hour commute home, I captured a few photos of the debacle. 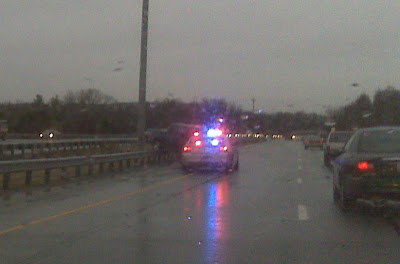 This Toyota Four Runner passed me at high speed despite numerous warnings of icy roads. Ten minutes later I caught up with him. Yes, he cleverly pinned his vehicle up on the guardrail. 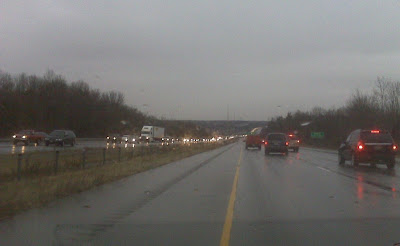 Black ice: any car hitting more than about 40 MPH was destined for an ugly demise. 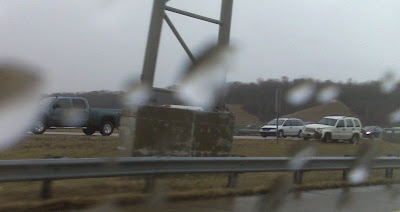 One of dozens of multi-car accidents I passed; the Cherokee got the worst of this matchup.

The Mustang, facing the wrong way, lost a battle with a Ford F-150. The firetruck referees the matchup. 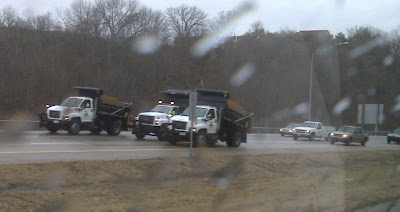 Three salt trucks headed in the other direction. This uphill stretch of road was impassable -- literally no vehicles were making it -- until these guys made a pass. 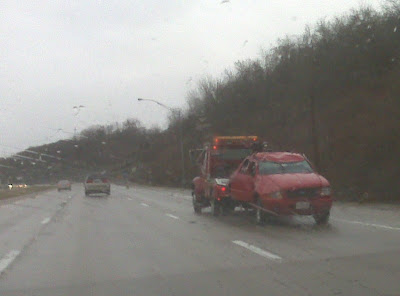 One of the hundreds of cars trashed by the weather. 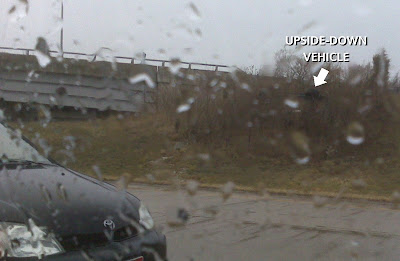 Lousy photo due to raindrops, but this is an upside-down vehicle. Click to view the closeup. 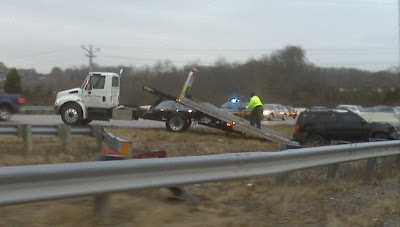 Memo to newbie four-wheel drive owners: your SUV doesn't stop any quicker on the ice than other vehicles. Learn it, love it, live it.

By the way: I blame global warming.

Update: The rocket scientists in Washington state have decided not to salt the roads... with predictable results. 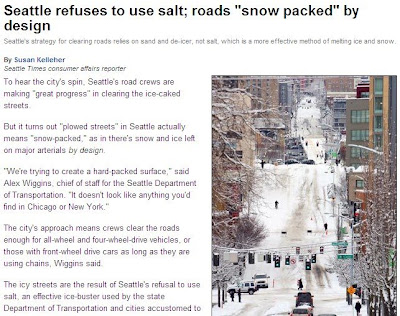 I get such a kick out of all the tree huggers....no salt....dont cut the trees.....until they cant get to the granola store because the Metro 123 is stuck...now its salt it up like a margarita

Free needles for junkies, but road salt for public safety is a big no no.

Salt saves lives. It saves injuries. It prevents accidents. How many people, especially the elderly are going to be injured because of failure to salt sidewalks and streets? People could be permanently cripped from these falls. How many serious car accidents are going to occur? What about emergency crews not being able to get somewhere? ...And using rubber blades to avoid road damage. It's nuts. Tort lawyers may even sue the city because of the damages their clients have suffered.

...the major medical centers for the Northwest are located [on a hill and] a medical response team might encounter huge delays transporting a critically injured patient to one of these centers when traffic is gridlocked due to ice that is three days old. Ice that is present only becuase of the of the mayor's enormous ego... Maybe he could see first hand what I did today on the corner of Madison and Broadway, an ambulance that waited through four stop lights less than two blocks from Swedish medical center. It could not move because there were too many vehicles, too few lanes available and way too much ice to negotiate. Cars were spinning their tires, stuck on the ice. People have to get around, emergency service[s] have to get around, and our mayor needs to come around to see his policies are dangerous, if not down right stupid!

Let me get this straight: You aren't using salt because it would run into Puget Sound? Which, if I recall is a rather large body of SALT water? Are you kidding? This is what passes for good governance in a "reality based" community? I think I'll stay in my little backwoods hick town here where we get 150" of snow per year and where schools don't close unless we get more than a foot in 24 hours. Wow. Good luck!

Hee hee hee! The thought of all those dreadful SUV's pulling all the little green cars out of the ditches just warms my cockles! Long live the liberals! The entertainment value is priceless.

at 6:48 PM
Email ThisBlogThis!Share to TwitterShare to FacebookShare to Pinterest
Labels: Autos, Climate