Democrats Preparing to Steal YAE (Yet Another Election) 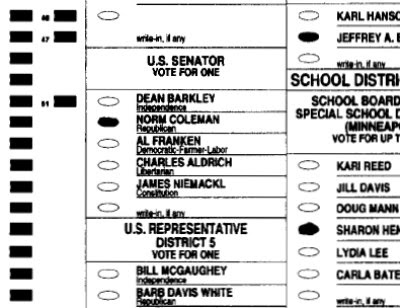 Al Franken's campaign claimed that the ballot at right represents a vote for the one-time SNL writer, failed Air America host, and silent participant in the Gloria Wise ripoffs.

After the challenge, as you might expect, this vote went to Franken.

Although Norm Coleman won the election and the recount, Democrats (along with their pals at ACORN and its hundreds of affiliates) appear ready to steal the election.

Just like the race for the Governorship in Washington state in '04, won by a Republican.

Won, that is, until the dead walked the Earth and voted Democrat.

Gateway Pundit has the crucial info.