Overnight News from around the Blagosphere


This is not the Blago I thought I knew. 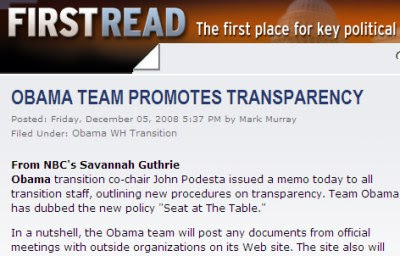 MSNBC: Obama team promotes transparency - Friday, December 05, 2008 - Obama transition co-chair John Podesta issued a memo today to all transition staff, outlining new procedures on transparency. Team Obama has dubbed the new policy "Seat at The Table." In a nutshell, the Obama team will post any documents from official meetings with outside organizations on its Web site. The site also will feature dates of the meetings and the names of organizations involved in the meetings...

• Blago and Emanuel had 21 conversations regarding the vacant Senate seat: A little boidie told Sun-Times columnist Michael Sneed that President-elect Barack Obama's chief of staff, Rahm Emanuel, had 21 separate conversations with Blago, all taped by the feds and dealing with his boss' vacant Senate seat. If Sneed's count is accurate, isn't it curious that Fitzgerald chose to redact all 21 of the Blago-Emanuel conversations?

• In '02 Blago demanded $25K from Jesse Jackson, Jr.: The Washington Post reports that Jackson (D-IL) told the feds that Blago (D-Daley Machine) asked for a $25K contribution during his 2002 run for governor. Jackson didn't come through with the money and, after his wife was turned down for an appointment to the state lottery directorship, Blago is reported to have told him: "Well, I guess you wish you'd given me that $25,000 now."

• ABC TV in Chicago reports that, in Blago's yute, he supposedly ran a gambling operation in conjunction with the mob.

The ABC7 I-Team has learned that an attorney who went undercover for the FBI in the late 1980's says he told federal authorities years ago about wrongdoing by Blagojevich... [Robert] Cooley was a criminal defense lawyer in Chicago in the late 1980's who became one of the most potent witnesses against Chicago corruption, testifying for federal prosecutors in cases that resulted in dozens of convictions.

Cooley says that before Rod Blagojevich got into politics he was a bookmaker on the North Side who regularly paid the Chicago mob to operate... Cooley said he reported to federal authorities nearly two decades ago that Rod Blagojevich had been operating an illegal sports gambling business... Cooley's undercover work and testimony put away 24 crooked politicians, judges, lawyers and cops... "I predicted five years ago when he ran the first time that he was a hands on person who would be selling every position in the state of Illinois and that it exactly what happened," said Cooley. 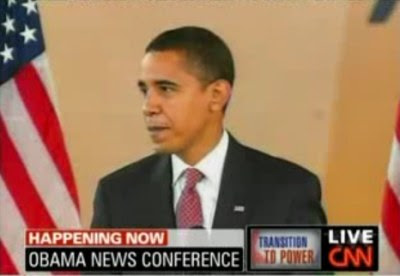 • President-elect Obama's response to a question regarding Emanuel: "John, John.... let, let me, let me just cut you off, 'cause I don't want you to waste your question. Uh, as I indicated yesterday, we've done a full review of this, the, the, the facts are gonna be released next week, it would be inappropriate for me to comment, uh, because, the, for example, the the story you just talked about in your own paper, uh, I haven't confirmed it was accurate, and I don't want to get into the details at this point, so do you have another question?"

What happened to "My Seat at the Table"? A "bold, new move"? Transparency?

I guess that all "changed" in the last week.