Bailout Transparency: The Case of the Mysterious Redactions


BailoutSleuth is tracking the massive nationalization effort known as "the bailout". Reason Magazine (via Instapundit) highlights its most recent findings including the Treasury Department's odd definition of "transparency".

On October 13, Neel Kashkari, an interim assistant secretary of the U.S. Treasury, sought to ease concerns about how the just-enacted $700 billion financial bailout plan would be implemented. “We are committed to transparency and oversight in all aspects of the program,” Kashkari said, “and have already taken several important steps in this area.” 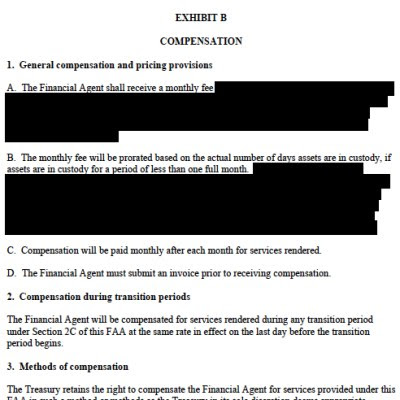 Four days later, the Treasury Department announced one of the first major contracts of the bailout plan: The Bank of New York Mellon would oversee the auction and tracking of distressed assets, one of the biggest contracts in the package. But when the department posted notice of the contract, it blacked out how much the company would be paid.

Last week Fox News sued the Treasury Department over its lack of disclosure. 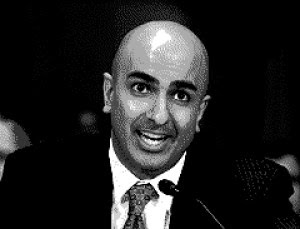 Fox Business Network said Thursday it filed suit against the Treasury Department, seeking to force the agency to turn over information on its bailout deals with American International Group Inc., Citigroup Inc. and Bank of New York Mellon... The network said that the Treasury Department had either rejected its requests for details on the agreements with those companies, or failed to respond to its petitions for expedited disclosure under the federal Freedom of Information Act...

"The Treasury has repeatedly ignored our requests for information on how the government is allocating money to these troubled institutions,'' said Kevin Magee, executive vice president of Fox News. "In a critical time like this amidst mounting corruptions and an economic crisis, we as a news organization feel it's more important than ever to hold the government accountable...'

When the Associated Press contacted 21 banks last week and asked four simple questions of each regarding usage of bailout funds, they received a nice round number of answers: zero.

The Associated Press contacted 21 banks that have received at least $1 billion in taxpayer money and asked four questions: How much has been spent? What was it spent on? How much is being held in savings, and what's the plan for the rest?

None of the banks provided specific answers.

Hey, it's only $700 or so billion of our money. What could possibly go wrong?
at 11:01 AM
Email ThisBlogThis!Share to TwitterShare to FacebookShare to Pinterest
Labels: Democrats, Economy