So a group -- whose mission is the destruction of your entire country -- chucks hundreds of missiles into your territory and thereby kills a bunch of innocent civilians. After warning and warning and warning, you retaliate with overwhelming force, killing two hundred of the group's leaders and members with pinpoint precision unheard of in the annals of war. 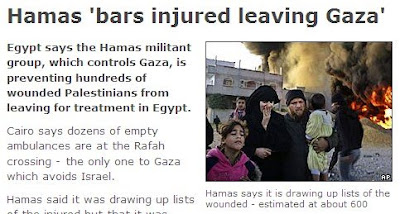 It appears that Israel's retaliatory attacks killed 240, of whom 180 were Hamas leaders or fighters. This means that less than 25% (we're not sure exactly how many) of the dead were civilian casualties. The number is elevated because Hamas intentionally places its facilities next to hospitals, schools and mosques. In other words, Hamas routinely uses human shields. These acts violate every facet of any moral code. 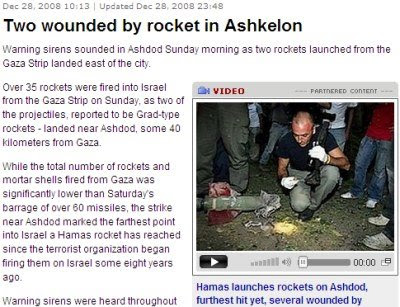 How do you react?

Well, if you're a liberal, you complain when the folks getting attacked retaliate. 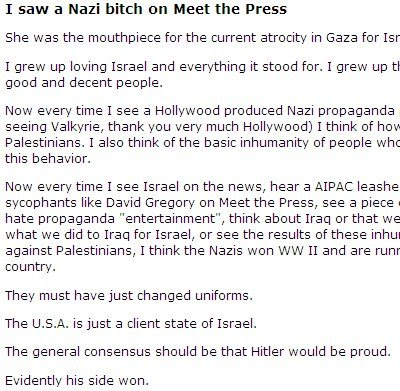 • Like Salon's Glenn Greenwald: "[How can we not mention] ...the ongoing four-decades brutal occupation or the recent, grotesquely inhumane blockade of Gaza -- would find the slaughter of scores of innocent Palestinians to be a horrible and deeply lamentable event." (Shhhh... no one tell Greewald about Egypt's blockade of Gaza; or how Russia reacted when attacked by Chechen separatists. Those standards don't apply!)

• Or the vast majority of Salon readers: "Peretz - and his Kach-olytes on The Spine - have never really cared that much about the deaths of Arabs or Muslims, who they regard as only marginally human... I saw a Nazi b*tch on Meet the Press, she was the mouthpiece for the current atrocity in Gaza for Israel."

• Or the grotesque Philip Weiss: "[The] Gaza slaughter will help end the Israel lobby."

• Or the execrable Vorpal Putz? "Collective punishment is a War Crime." (No word on what Israel should have done; perhaps throw up its hands in surrender and march out of its tiny sliver of land into the ocean).

• Perchance the wearily predictable "professor", Juan Cole? "Israel blames Hamas for primitive homemade rocket attacks on the nearby Israeli city of Sederot... [Eh, who should they blame, "professor"?] ...230 people were slaughtered in a day, over 70 of them innocent civilians. In contrast, from the ceasefire Hamas announced in June, 2008 until Saturday, no Israelis had been killed by Hamas. The infliction of this sort of death toll is known in the law of war as a disproportionate response, and it is a war crime..." (Put another way, if Poland had reacted to the Nazi invasion with its own massive bombing campaign, that would be a war crime too, using the 'logic' of 'disproportionate response'. Just to keep score, it's the war-time standard that applies only to the U.S. and Israel in the magical land of Coleistan)

• Or the miracle cure for insomnia, Taylor Marsh: "Israel obviously learned nothing from their war with Lebanon. It's not about "very disproportionate, indeed," contrary to Mr. Peretz's whining. It's about Israel refusing to wake up and deal with the world condemnation..." (Because we all know the 'world' supports Israel so much!)

Israel has two simple conditions for a lasting ceasefire: (a) stop bombing Israel; and (b) acknowledge Israel’s right to exist. Simple enough? No: those two tenets are apparently far too complicated for the American left to comprehend.

To get a sense of how many rockets are currently slamming into Israel, subscribe to Twitter updates at @qassamcount.

Israel has few enough friends in the world community: there's a decided scarcity of those who support intellectual progress, civilization, and tolerance.

I think it's fair to say that we can now count the American left among Israel's enemies. But perhaps someone could explain to me how support for Hamas is now "progressive".

Update: Just in time for the Christmas holiday, Hamas "[passed] a Shari’a criminal code for the Palestinian Authority [and for certain crimes] it legalizes crucifixion." Enlightened!

Update II: “There is no such thing as a ‘disproportionate response’ to calls for genocide.”:

Update III: On Fox News, Charles Krauthammer noted that the Israeli military warned Palestinian "human shields" ahead of time that attacks were coming. Got that, "Perfesser" Juan Cole?

Israel's crime isn't striking back at terror, but demonstrating, year after year, that a country in the Middle East can be governed without resort to terror. Israel's crime hasn't been denying Arab rights, but insisting on human rights for women and minorities.