David Axelrod, KHQA and now the venerable Chicago Tribune all independently reported that Governor Blagojevich and Barack Obama held discussions regarding his Senate replacement. For those keeping score at home, this makes four different sources (KHQA had two articles on the topic) referencing one or more meetings, which Barack Obama said never took place. Who would you believe: me or your lying eyes? 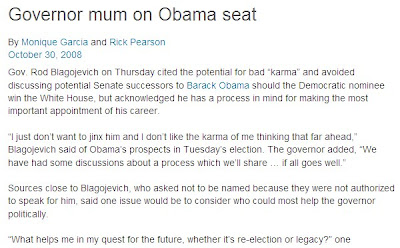 Commenter Howdy pointed us to a Tribune article that references additional discussions between Obama and Governor Blagojevich regarding his Senate seat.

Gov. Rod Blagojevich on Thursday cited the potential for bad “karma” and avoided discussing potential Senate successors to Barack Obama should the Democratic nominee win the White House, but acknowledged he has a process in mind for making the most important appointment of his career. 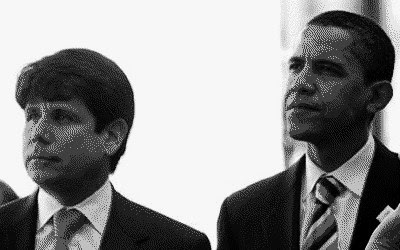 “I just don’t want to jinx him and I don’t like the karma of me thinking that far ahead,” Blagojevich said of Obama’s prospects in Tuesday’s election. The governor added, “We have had some discussions about a process which we’ll share … if all goes well.”

Sources close to Blagojevich, who asked not to be named because they were not authorized to speak for him, said one issue would be to consider who could most help the governor politically.

“What helps me in my quest for the future, whether it’s re-election or legacy?” one Blagojevich confidant said of the selection process being eyed by the Democratic governor, who has seen his job approval rating fall to staggering levels. “It’s a big milestone.”

It's a big millstone, alright. Oh. Did you say milestone? Sorry.

Linked by: LGF, Flopping Aces, Say Anything, Tammy Bruce and Beltway Blips. Thanks!
at 5:31 AM
Email ThisBlogThis!Share to TwitterShare to FacebookShare to Pinterest
Labels: Crime, Democrats, Obama