$130 billion in a false-bottom briefcase

Did I mention the face value of the bearer bonds? Roughly $134 billion. Seriously. 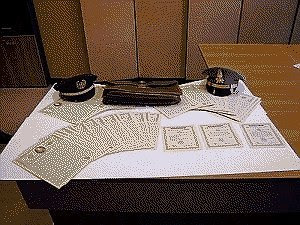 Note that this has received very little coverage in the so-called "mainstream US media" - but it is everywhere in Europe and Asia... Japan, for its part, oddly said the following as soon as this story started to hit the press:

“We have complete trust in the fact that the U.S. views its strong-dollar policy as fundamental,” Yosano, 70, said in an interview in Tokyo on June 10 before attending a Group of Eight meeting of finance ministers starting today in Italy. “So our trust in U.S. Treasuries is absolutely unshakable.”

Uh huh. And the Japanese said in December of 1941 that all was well too. Anyone remember what happened on the morning of the 7th?

Let's apply a little "Occam's Razor" to this entire story.

You're not going to walk into a bank with $130 billion in bearer bonds and cash them. Nor are you going to sell a bond with a $500 million face value to someone without them authenticating it. They will be authenticated before you get one dime out of them - no matter who you think you're going to "give" them to.

So if they're fakes and you're "just screwing around", there is no reason to hide them. Nor is there any particular reason to have authentic and recent original bank documents in your luggage with them, as has been reported.

Next, unless someone knew you were smuggling them, why would you be subject to that sort of search? What made the people involved "interesting" to the authorities? This doesn't sound like a random stop to me; how many people are carrying $130 billion in bearer bonds at any given point in time? No, someone was tipped off that this was happening. Now why would you bother to stop them here, prior to their attempted delivery of such instruments, if they were fake?

...So let's assume that the certificates are real, as German media seems to believe and which, by the way, makes logical sense given what they were and the sheer impossibility of cashing a fake $500 million bond.

Ok, who has $130 billion in bearer bonds? Remember, bearer instruments haven't been issued by the Treasury since 1982, when they became illegal to issue, at least to US institutions and residents (there was an exception carved out for Treasury instruments issued to non-US residents in 1985 - a time of high deficits) The answer to that question: it is rather unlikely that there remains $130 billion of legitimate US Bearer issuance outstanding anywhere - to anyone.

...Are we willing to assume that all the "issue" of Treasury bonds has been done "above board" as required by law. If Treasury has been surreptitiously issuing bonds to, say, Japan, as a means of financing deficits that someone didn't want reported over the last, oh, say 10 or 20 years, then the [s*** is about to hit the fan].

Who could have possibly been complicit in such a scheme? I can come up with only two nations (and only nations could be involved due to size): The Japanese and Chinese. Since the two individuals who were arrested were reported to be Japanese nationals... There are tremendous implications in an event like this, again, assuming the bonds are real.

The owner is going to want them back, of course. But Italy is going to keep a third as their statutory penalty for non-declaration on the border. Oops. That's great for Italy, but it blows bananas for the actual owner.

Of course Italy (or the US!) could declare them "fake" and as a consequence simply burn them. If they are in fact real, that's an even bigger problem. See, Bearer Bonds are issued without registration - they are as anonymous as a $100 bill in terms of who owns them. That's one of their "features", and why they were often used for various clandestine money operations. So if they are real and are destroyed, the owner is out of luck - their money is gone just as it is if you burn a $100 bill in an ashtray.

How much is $130 billion in this context? About 1/5th or so of what Japan legitimately owns of US Treasury debt. How would you like to take an instantaneous (and permanent!) 20% haircut on your securities? That's what I thought.

To add some balance here, there have been stories about fake bearer bonds coming out of North Korea and other places for years. But the idiocy of attempting to pass a $500 million certificate belies this possibility - who in the name of God would take such a thing and give you anything for it without authenticating it first? While bearer instrument are "anonymous" in terms of who owns them, their authenticity is easily verified as they ARE serialized instruments.

I remain puzzled, and am not advancing the above theory as fact.

It is, however, one of the few explanations that actually fits the facts, and for that reason, I think we need some answers. If in fact previous administrations were issuing "off-book" Treasury debt in this fashion to sovereigns then implications are truly explosive as such issues are blatant and outrageous unlawful acts and would expose everyone involved to severe criminal penalties.

Let's hope we get those answers, and this isn't one of those "funny things" that just disappears into the night.

Based upon the publicity thus far, it already has disappeared.

But it's only $134 billion we're talking about. In a briefcase. When the dollar is already under significant stress.

Update: Reuters reports that the U.S. government believes the bonds are bogus. I don't know about you, but I'm relieved. In a non-relieved way, that is.

at 8:25 PM
Email ThisBlogThis!Share to TwitterShare to FacebookShare to Pinterest
Labels: Economy