Shock: ACORN manual shows it lied about 'no quotas' policy


An internal 2004 manual authored by the community organizing group ACORN describes worker quotas for voter registration forms despite the organization's claims that it never employed quotas.

[The manual] advises managers that workers who do not produce a set number of voter registrations per day should be fired. 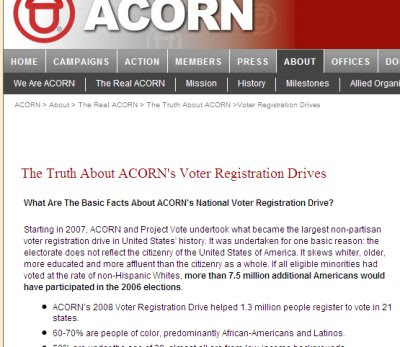 "If a person performs at less than standard have them come to another training, send them out with a team leader. If they still perform poorly then re-train once more, then fire," the 2004 management document states... "Anyone who performs at less than three voter registrations per hour SHOULD NOT BE ON THE STAFF," the directive states.

A quota system for voter registration drives is barred under state law and has been cited as a major factor in pending criminal cases in Pittsburgh. Seven people, all with ties to ACORN, have been charged by Allegheny County District Attorney Stephen A. Zappala Jr., with violating state election laws and submitting fraudulent voter registration applications. Those cases are pending.

ACORN has been implicated in voter-registration fraud cases in fifteen states and it always claims that rogue operatives are responsible for the endemic fraud.

ACORN's website has not yet been updated to account for the newly discovered manual. Look for those modifications as soon as this story hits Memeorandum or catches the attention of one of the "progressive" blogs. 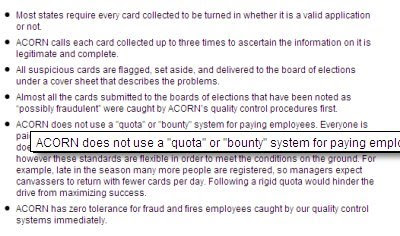 In fact, Rep. Steve King (R-IA) beleives that ACORN is responsible for hundreds of thousands of bogus voters.

ACORN appears to be a criminal enterprise. It -- and its many affiliates -- must be prosecuted to the fullest extent of the law. And Congress must scrutinize any delay in these prosecutions.

The sanctity of the American voting system lies in the balance.


Update: ACORN is now rallying for "health care reform" -- i.e., creating a national socialized health service that is simply another payoff for sister unions like the UAW, which are burdened with massive health care debts.

...please where can I buy a unicorn?