"Why do some liberals despise our military?"


Barbara Boxer is a disgrace.

...It didn't take long for the state's junior senator, Democrat Barbara Boxer, to object when Brig. Gen. Michael Walsh followed proper military protocol last week by calling her "ma'am" at a hearing of the Senate's Environment and Public Works Committee, which Boxer heads. 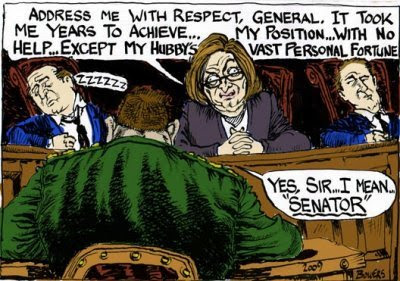 "Do me a favor. Could you say 'senator' instead of 'ma'am'? It's just a thing; I worked so hard to get that title, so I'd appreciate it," Boxer said.

[Ed: As opposed to the General? I wonder how hard he worked to earn that rank?]

Chuck DeVore, a Republican who's trying to deny Boxer a fourth term, said it was remarkable that Boxer "dressed down" a general, calling it "the latest liberal-military confrontation." He said it wasn't Boxer's first confrontation with the military, noting that she had cut her political teeth during protests of the Vietnam War in the San Francisco Bay area.

"Why do some liberals apparently despise our military?" DeVore asks in a statement on his campaign's Web site. He says the use of "ma'am" is "a perfectly acceptable sign of military respect to both a U.S. senator or a senior female officer."

Republican critics in the blogosphere and elsewhere are excoriating Boxer. Sen. Jim DeMint, R-S.C., called Boxer "a loose cannon" and an embarrassment to her party.

"I just can't put up with that kind of thing when people think too much of themselves, and we see a lot of that in Washington," DeMint told Fox News Channel.

California's beleaguered taxpayers would do well to throw her out on her kiester at the next available opportunity.