The SHO offers massage seats that improve on Mercedes's system by including the whole seat, not just the back. (They're heated and cooled, too.) It has a blind-spot warning system on the outside rearview mirrors. Adaptive cruise control flashes a heads-up warning on the windshield when you run up on slower traffic, and another radar system scans for cross traffic when you're backing out of a parking space. That's all quite nice, but you don't buy a car strictly because it has massage seats. (Okay, maybe you do.) The reason we care about the new Taurus can be boiled down to four words: Looks good, goes fast. 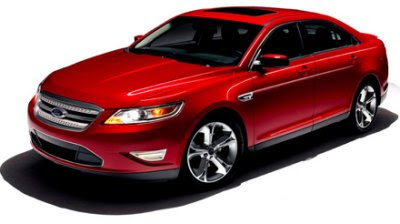 Here we have an affordable American sedan that benchmarks not the Chevy Impala or Hyundai Sonata but the Audi A6 and BMW 535xi. The BMW, for instance, offers all-wheel drive and a twin-turbocharged, direct-injected 300 hp six-cylinder for about $54,000. The SHO also uses all-wheel drive and a twin-turbo, direct-injection six-cylinder, but it puts out more power — 365 hp — and costs $16,000 less than the 535xi. The fact that a Taurus is cheaper than a 5-Series isn't news. But the fact that it plays on the same field technologically is crazy...

If these specs and impressions remain true for the production vehicles, Ford could have a real winner.

at 8:10 PM
Email ThisBlogThis!Share to TwitterShare to FacebookShare to Pinterest
Labels: Autos