On CNBC today (hat tip: Tyler Durden), Merrill Lynch Economist David Rosenberg had some discomfiting news for those betting on a quick recovery.

"...Although jobless claims have peaked, they've been over 600,000 for what, about 20 weeks in a row... consistent with job losses and a higher unemployment rate...and what's very interesting about this particular cycle is that companies have let go 8,000,000 workers... and we have the work-week at a record low of 33 hours. So what's gonna happen is, even if these 'green shoots' turn out to be something more significant and we get a recovery, companies are going to take their part-time workers... and raise people's hours, so the traditional 100 to 150 thousand workers that come into the labor force every month, well I've got bad news: There's not going to be any jobs for them... 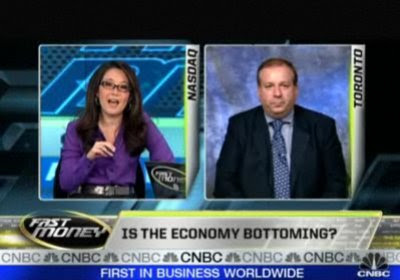 This is going to be the 'Mother of All Jobless Recoveries', it's going to last a couple of years... the unemployment rate is still going to make new post-World War II highs."

Rosenberg's track record for predictions is a good one, with the only criticism coming from those who say he got paranoid about the equity markets two years too soon.

The job loss is further evidence that the Obama "Stimulus" Package was an utter and complete disaster. Even the New York Times (if it really can be considered a news source these days), reports that the "Stimulus Package discourages hiring."

It's hard to have a recovery when hiring is impaired and unemployment can't recover due to an egregiously flawed "Stimulus" package.

As for those who believe that the credit markets have essentially healed and that the toxic vehicles are working their way out of the system, I have only two words. See below.

Doctor Housing Bubble has followed the mortgage crisis more closely than most and calls attention to the impending tidal wave of bizarre mortgage product "resets".

First a little nomenclature: Subprime loans -- the toxic mortgages we've heard so much about of late -- are those issued to borrowers with credit scores below 620. Alt-A loans are a notch above subprime, say, where borrowers' credit scores ranged from 620 to 660. And Option ARMs are weird variants of Adjustable Rate Mortgages, which give borrowers the option of various payments (called "pick-a-pay"). To put it bluntly, Alt-A and Option ARMs appear to be almost as poisonous as sub-prime.

What many analysts fear are the waves of "resets", when the teaser interest rates for these products expire. That means Freddie Flipper, who bought that $1 million McMansion in 2006 as an "investment property", will see his monthly payment double on a house that's now worth $600,000. And he will, like so many others, walk away after dropping the keys in an envelope and mailing them to his mortgage company (i.e., "jinglemail").

The Alt-A and Option ARM tsunami still looms large casting a dark shadow over the state of California housing. This is on top of the reality that we are now talking about issuing IOUs for only the second time since the Great Depression.


...As you can tell, much of what is occurring is status quo. It will remain that way until the end of the year, when we shift from less than $2 billion in option ARM recasts per month to close to $4 billion at the end of Q4 of 2009. Most of these loans are in California. Of the over 2 million in Alt-A loans 643,000 are in California. If you think we are doing much to address this look at these facts:

...Much of the losses are occurring because these loans are defaulting left and right and we have yet to hit the major recast wave as the above chart shows. Alt-A and option ARMs are toxic waste and will be hitting California at a time where the state is financially vulnerable...

Credit Suisse says that the tidal wave of Option Arm resets will begin in earnest around March of next year.

If you think that the Democrat Utopia of California is in bad shape now, plenty of folks believe next year will be worse. And a recovery won't be coming until 2011, if this chart has any merit.

I can just taste the change. Or maybe I just vomited a little inside my mouth.