Who voted FOR the Economy-Destroyer called Cap-and-Trade?


It was a close vote, but the Pelosi-Socialist-Democrat Party carried the day on the preliminary vote for Cap-and-Trade. It was 217 - 205 for the most massive tax increase in history, which would add $3,900 to the average family's tax bill. A bill that no one has read with last minute amendments consisting of welfare payments, payoffs to ACORN and lots of pork payoffs to fence-sitters.


The bill consists of at least 397 new regulations and 1060 new mandates. An immense bureaucracy, consisting of tens of thousands of new government jobs, will be funded by your new tax bills. Power Line published John Boehner's graphic, which describes the new bureaucracies: 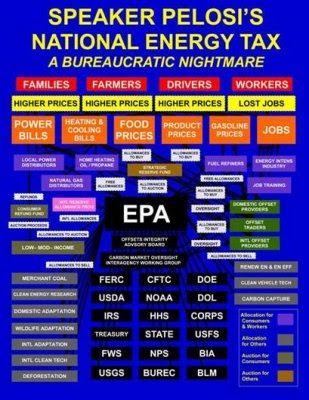 Ironic, eh? You'll receive new tax bills each year for the privilege of funding bureaucrats who will lower the carbon limits annually, which will result in increased tax bills... ad infinitum.

Who are the fence-sitters?

Some of the key Democrats who voted to support the preliminary vote are the supposedly "conservative" Democrats. Call them now:

Check out the complete list of fence-sitters and make some calls now.

Stop Pelosi and her bill, which was summarized perfectly by GOP Rep. Rohrbacher, who said, "If this passes, jobs will go to China and economy will go to hell."

And congratulations are due to the House GOP and its leadership: John Boehner and Eric Cantor. Not a single Republican voted for Pelosi's Socialist nightmare. Well done -- and keep up the good fight.