Obamanomics: Jobless are turning down work so they can surf the web, watch WWE RAW and collect unemployment

In Michigan, the state with the highest unemployment rate in the U.S., people are turning down job offers so they can continue collecting unemployment checks. With the recent federal extensions, those unemployment checks can run as long as 99 weeks (for you liberals, that's nearly two years). At which point it's not unemployment, it's yet another failed welfare-slash-redistribution scheme.

Members of the Michigan Nursery and Landscape Association "have told me that they have a lot of people applying but that when they actually talk to them, it turns out that they're on unemployment and not looking for work," said Amy Frankmann, the group's executive director. "It is starting to make things difficult."

Chris Pompeo, vice president of operations for Landscape America in Warren, said he has had about a dozen offers declined. One applicant, who had eight weeks to go until his state unemployment benefits ran out, asked for a deferred start date.

It's illegal to collect unemployment benefits after receiving a suitable job offer, but that hasn't stopped plenty of workers from doing so. Furthermore, fully 15% of Michigan's economy has been driven underground, with barter and cash transactions escaping government scrutiny. Boy, that Governor Granholm's doing a bang-up job! 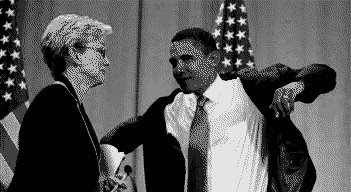 The current federal jobless benefits extension "reduces the incentive to find work", according to David Littman, an economist at the Mackinac Center for Public Policy. One unemployed landscaper confirms that assertion; he says he'll start searching for work when his benefits expire. He estimates that he only loses about $50 a week staying unemployed.

Gee, these Democrats are just phenomenal at central planning. They remind me of the guys running East Germany in the sixties.

Similarly:
On Neal Boortz, a cashier called in, reporting that she copied the receipts of people on foodstamps -- the receipts show them buying top grade beef, lobster, and the like.