Yeah, you remember that conspiracy orchestrated by those greedy, corporate, Wall Street globalists?

Planning to walk behind the nationally-broadcast Rose Parade Monday demonstrators against Wall Street 'greed and corruption' have constructed a 70-foot-long octopus entirely from recycled plastic bags... The octopus is said to represent the tentacles 'that reach into your pocket to get your money and a tentacle to get your house,' activist Mark Lipman told the Los Angeles Times. 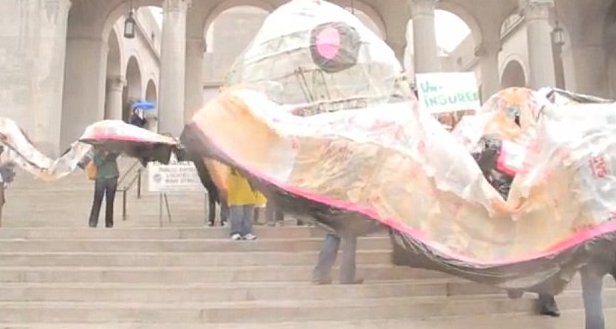 ...During a dress rehearsal of their plastic creature in November outside City Hall, activists carrying signs reading Teacher, Home Owner, Retiree and of course, 99 per cent, one-by-one stepped into grabbing point of the activist-raised arms pulling them in.

Say, where have we seen that octopus symbolism before?

Are people so afraid to stand up against the hatred, public hatred broadcast for the entire world to see? The image of the octopus has been used in attacks on the Jews for over a century. Here's a roundup on the Jewish conspiracy octopus at the Coordinating Forum for Countering Anti-Semitism. 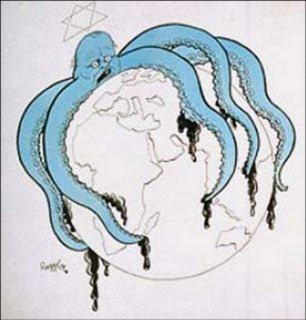 And the local organizers didn't even try to hide their hatred.

People keep saying that the Occupy movement is all about fairness and "getting money out of politics."

This is the modern Left in action. It tries to divide Americans against one another: rich vs. poor, black vs. white, union vs. non-union, urban vs. rural, you name it.

This kind of rhetoric defies American tradition and, furthermore, it's downright dangerous. Nothing good can come from demonizing arbitrary groups of Americans.

Your blogger buddy there has used an anti-semitic cartoon. The OWS protesters haven't actually made any similar suggestion.

Meanwhile, Jews over a period of several thousand years have been compared to all manner of things in propaganda. Are all such objects now off limits?
Has anyone told the mafia they can't call people rats anymore because it will clearly be about Jews rather than the fkn obvious?

Meanwhile, I can't wait for Big Government to pick the story up. It's been a whole week since they actually posted a 1930s anti-Jew poster on their website, with a different caption.