Kenneth Timmerman pulls back the covers on the Crackpot-In-Chief's campaign, revealing an ugly scene in Tehran. Turns out the Mullahs love Ron Paul (not like they love goats, mind you, but strictly in a platonic way).

PressTV has stepped up its coverage of Paul’s campaign to win the Republican presidential nomination in recent weeks, featuring his anti-Israel rants, his claim that sanctions against Iran are “acts of war,” his approval of Iran’s nuclear ambitions, and much more. 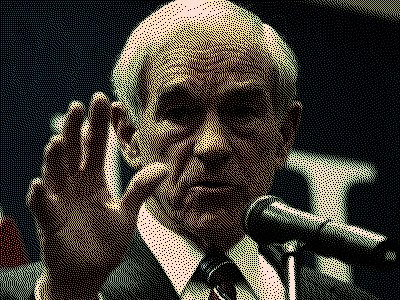 The Iranian government channel portrays Ron Paul as an American hero, and brings on conspiracy theorists masquerading as political “analysts” to laud him for “challenging the American establishment” and the “corporate neo-conservative Zionist consensus,” that cabal of Jews, banksters, and Reagan Democrats who in Tehran’s eyes (and in the eyes of these Ron Paul supporters) run the world.

It’s a script taken almost word-for-word from the infamous anti-Semitic forgery, The Protocols of the Elders of Zion.

...No contemporary U.S. political leader has been so in sync with Tehran as Ron Paul. Here are just a few of the recent Ron Paul sound bites on Iran and U.S. policy toward Iran prominently featured by PressTV:

“I think we’re looking for trouble because we put these horrendous sanctions on Iran… Sanctions against Iran are definite steps toward a US attack.” “Iran sanctions ‘acts of war’: Ron Paul,” Dec. 31, 2011; “Ron Paul raps US hostility toward Iran,” Jan. 7, 2012.

“Iran is not a physical threat to us. They do not have capabilities. The stories you might hear about them being on the verge of a nuclear weapon is not true by our CIA and by the United Nations. They are not on the verge of it.” Quick Facts: Ron Paul on US Foreign Policy, Dec. 24, 2011.

“Who are they [Iran] going to bomb? If they had one or two bombs, they are going to bomb Israel? Israel has 300 of them! And our submarines all around there passing and everything else.” Quick Facts: Ron Paul on US Foreign Policy, Dec. 24, 2011...

Of course, Paul -- an unabashed propagandist for the Mullahs -- willfully ignores their well-documented threats, screeds and promises of destruction. But maybe the Iranians are just kidding about destroying America and Israel. Kinda like Hitler's satirical work, Mein Kampf.

wow, it is amazing how hard this fails