Obama is the President the Constitution Was Designed to Prevent

Executive Orders: A liberal constitutional scholar warns of the concentration of power not only in the hands of one branch of government but in a single man who ignores the Constitution and acts of Congress on a whim.

As the story goes, Benjamin Franklin emerged from Independence Hall at the close of the Constitutional Convention in Philadelphia on Sept. 18, 1787, when a woman asked, "Well, Doctor, what have we got, a republic or a monarchy?" Franklin is said to have replied, "A republic, madam — if you can keep it." 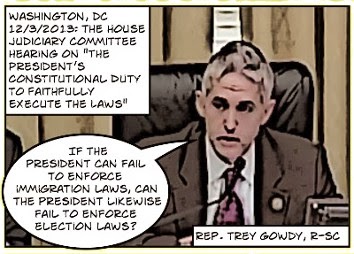 The Founders designed a system of checks and balances among three branches of government that was based on the consent of the governed. The power grab that is ObamaCare, nationalizing one-sixth of the economy, is just the latest example of an increasingly imperial presidency that ignores the Constitution, the will of Congress, the laws sworn to be faithfully executed and the will of the people who never wanted it in the first place.

Rep. Steve King, R-Iowa, recently noted to Fox News' Sean Hannity how President Obama "extended the employer mandate for a year, even though the law says 'shall commence in each month after December of 2013.' He extended the individual mandate, stretched that out and now the small-package plans. There's at least three times that he's violated the Constitution with ObamaCare."

When confronted with his lies that under ObamaCare you could keep your plan and doctor if you like them, and millions were losing the coverage they liked, the president held a press conference where he decreed that insurance companies could violate the "law of the land" and reissue policies that did not contain Obama-Care's 10 essential mandates, if only for a year.

This prompted Jonathan Turley, a liberal law professor at George Washington University and supporter of the Affordable Care Act, to tell the House Judiciary Committee at a Dec. 3 hearing, titled "The President's Constitutional Duty to Faithfully Execute the Laws," that Obama's abuse of executive power has grown to the point that "he's becoming the very danger the Constitution was designed to avoid."

Turley cited the "radical expansion of presidential powers" and the rise of what he termed the "fourth branch" of government — massive federal departments and agencies that can write regulations that have the effect of law written by unelected bureaucrats often contrary to the will of Congress and the American people.

Indeed, how can the governed give their consent when they don't know what they're consenting to? Philip Klein of the American Spectator counted 700 references in ObamaCare to the secretary "shall," 200 to the secretary "may" and 139 to the secretary "determines." That would be HHS Secretary Sebelius, for whom no one voted.

"That is a very dangerous sort of thing for the president to do, to wantonly ignore the laws," Michael Cannon, Cato Institute's director of health policy studies, also testified on Tuesday, "to try to impose obligation upon people that the legislature did not approve."

In 2012, Judge Andrew Napolitano, a constitutional scholar and Fox News commentator, raised the danger of Obama's shredding of the Constitution and his assault on the authority of the courts in a second term free of electoral restraints.

"I think the president is dangerously close to totalitarianism," Napolitano opined. "A few months ago he was saying, 'The Congress doesn't count, the Congress doesn't mean anything, I am going to rule by decree and by administrative regulation.' Now he's basically saying the Supreme Court doesn't count. It doesn't matter what they think. They can't review our legislation. That would leave just him as the only branch of government standing."

Yes, we were left with a republic. But whether we can keep it under this president is becoming increasingly uncertain.

So why doesn't someone do something about it? Quit bellyaching about Obama's impeachable offenses and GET RID OF HIM.

Why isn't anyone doing anything? Impotent House leadership, ideologues in the Senate and DOJ. Nobody except maybe Cruz has the guts to stand up and he is in a very small minority that has no power. Media is generally in the tank for Democraps too. We are stuck with criminal and treasonous activity for the foreseeable future.

So the House impeaches him and then it goes to the Senate for a trial... You think Reid will let that happen? How do you get rid of him...CONSTITUTIONALLY? Quit belly aching and get involved in politics if you aren't already. Work on a campaign. Replace the Senate.

Political Girl Yeap!!! That's about the size of it.

BUT it is still helpful to let off some STEAM in here.