Keeping Al Jazeera Out of Your Home [Jack]

Al Jazeera wants to be able to tell its anti-American story to everyone in the United States -- and it has begun by buying Current TV through Al Gore for an outrageous amount of money. 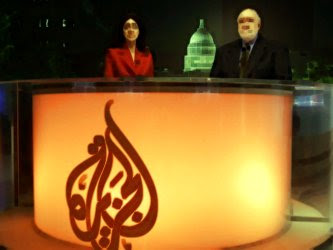 Their purpose is not to make money, but rather to be able to influence the American public. They are therefore prepared to buy their way into your home through your TV.

Money is no object to oil rich Qatar which has been ruled as an absolute and hereditary emirate by the Al Thani family since the mid-19th century. As the article below points out, most cable networks are paid by cable providers. However Qatar has so much money that it will pay your cable provider to be included in their mix of channels.

The only way we are going to stop this from happening is if we each advise our provider that we will drop their service if they include or retain Al Jazeera in their lineup.

Whether you are serviced by Time Warner, Comcast, Dish, Cox, Verizon, or AT&T, let them know now that if they begin to include Al Jazeera, you will switch to another provider.

Al Jazeera's announced plans to establish a new U.S. cable news channel via the purchase of Current TV isn't even 48 hours old and already it finds itself in a vicious battle to retain distribution rights.

Al Jazeera's acquisition of Current TV is basically a pay-for-distribution play. The Qatar-backed network plans to replace Current TV in the more than 40 million homes where it is currently distributed with its own news network, tentatively dubbed Al Jazeera America. The new network's success is predicated on maintaining, if not increasing, that level of distribution.

One person with knowledge of cable TV deals said pay-TV operators will definitely seek more favorable terms from Al Jazeera since, "no one wanted to carry Current TV and they want to carry an Al Jazeera channel even less."

For instance upon learning of deal, which closed on Wednesday, Time Warner Cable immediately said that it would terminate its contract with Current TV, meaning its customers would not be seeing the new network to be named Al Jazeera America...

Al Jazeera has been trying to break into the U.S. cable market for years, but the network has so far failed to gain significant distribution largely for political reasons. The Pan-Arab network had been viewed by many as being anti-American particularly at the height of the U.S. War in Iraq.

Cable industry sources interpreted that statement to mean that Time Warner Cable would be open to distributing Al Jazeera America, just not at the same 12 cents per subscriber per month that Current TV was receiving, media consultancy firm SNL Kagan said... By comparison, SNL Kagan said Fox News averages 89 cents per subscriber per month, while CNN gets 57 cents and MSNBC collects 18 cents...

Interesting: the average Fox News viewer is worth more than four (4) times his or her MSNBC equivalent. Which pretty much says it all about the radical sixties retreads running MSFBC.