[For those who] regularly drive three or four hours at time or who drive a lot in the worst areas of big cities, the question is: What gun can I keep in my car for self defense? ... In my mind, one gun stands out above the rest for this application–the Taurus Judge Public Defender. 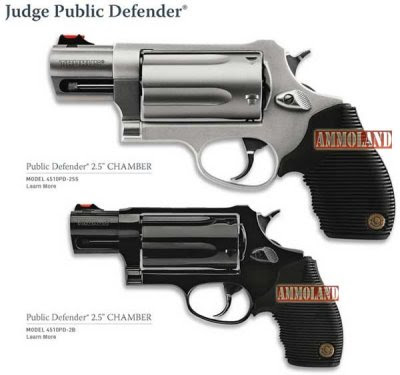 The Public Defender is a five shot revolver that holds either .45 long colt or .410 shotgun shells, or a combination of the two.

When Taurus debuted the Judge revolver family a few years back, they did something nobody saw coming–they turned the handgun world upside down. The Public Defender is a bit meatier than a .357 magnum with a similar length barrel, but its recoil is more comparable to a .38 Special and its self-defense advantages are similar to that of a small gauge shotgun.

The Judge family in general, and the Public Defender in specific, became so popular that Federal Ammunition starting loading .410 self-defense rounds specifically for handgun applications. These rounds contain nine big pellets in each shell. In a self-defense situation where a carjacker is holding his own gun and trying to pull your car door open, a Public Defender loaded with this ammo turns the tables quickly.

...The whole line of Taurus Judge revolvers is excellent, and they come in many variations–ranging from one with a polymer frame to a larger Judge with a six-inch barrel... However, the Public Defender is my favorite for the very reason Taurus provides on their website: “The ‘Public Defender’ delivers…devastating firepower in a…scaled down size that can travel with you.”

at 9:36 PM
Email ThisBlogThis!Share to TwitterShare to FacebookShare to Pinterest
Labels: Firearms

I saw that at the new BadBlue Guns site, and read about it. Looks like a really good, close-quarters stopper.

Good call to get a guns page going. I have it bookmarked.

There has been a lot of debate online about the effectiveness of the .410 shell out of such a short barrel. I don't know a lot about it personally, but the consensus seems to be its not exactly fatal; then again even if not fatal a .410 to the face would defiantly make you rethink your career as a carjacker. I've also heard it is really good for dealing with rattle snakes.

They're illegal in California, along with their long gun counterpart, for reasons almost too ridiculous to mention.
http://proof-proofpositive.blogspot.com/2013/01/when-idiots-write-gun-control-laws-we.html

Two friends of mine own this particular gun. They say that target practice with the .45 shells is pricey ($1/shell or so), but they like the .410 shell loads for home defense.

Good point about snakes. You won't find a manufacturer of snakeshot that recommends its use in a revolver. The Judge would appear to be an exception.

my favorite pistol for home defense. it's a very smooth shooting 45. my wife loves it as well