President Obama to again skip American Legion's Medal of Honor Inaugural Ball, remains only commander-in-chief to do so

Four years ago, Barack Obama became the first president in history to skip the American Legion's Salute to Heroes ball. And this time around, he plans on missing the event again.

For the second time President Barack Obama will not attend an Inaugural event ball held to recognize Medal of Honor recipients.

...Obama was criticized by some four years ago when he became the first President to skip the American Legion’s Salute to Heroes ball since it was first held in 1953.

Also noticeably absent from the planned list of attendees for the Jan. 21 event is former Marine Cpl. Dakota Meyer, one of only three living MoH recipients from the Afghanistan and Iraq wars and the only one who will not be present. 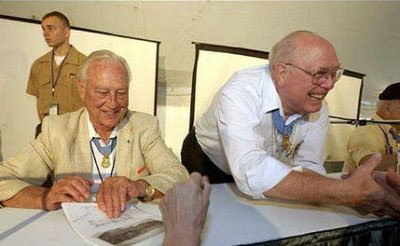 “As I understand it, invitations were sent to all living MOH recipients. 25 of them decided to attend our banquet,” Legion spokesman Marty Callaghan said in an email Friday. Meyer, who received the nation’s highest award for valor for going to the rescue of U.S. and Afghan troops caught in an ambush in 2009, could not be reached for comment.

In all, the 25 veterans slated to attend the ball represent about a third of the living Medal of Honor recipients, according to the Legion... The Legion began holding the Salute to Heroes Ball in 1953 as part of the Inauguration Day events surrounding the swearing in of Dwight Eisenhower as the 34th President of the United States.

Every president since then made an appearance at the ball until Obama four years ago.

This president doesn't much care for the American military, as evidenced by his efforts to dismantle it and instead redirect those monies to making the welfare state even more pervasive.

President Mitt Romney not only would have attended but donated to the Legion!

Every old time Vet I know voted for this guy. I don't get it. My step dad WWII B-17 pilot, Flew Berlin Air Lift, full career in AF. Yet, LOVES him. I've talked to other folks from WWII era and same thing. I don't get it.

Simply put, Obama has no honor, never has, never will.

This is a crying shame. This proves that all Obama thinks about is himself. Would not dissapoint me if he were impeached..Proud Vet