Caroline Glick continues to wake up the useful idiots who believe that Barack Obama is a friend of Israel, which remains the last best hope for Western Civilization in the Middle East.

I think it is pretty amazing that AIPAC is keeping mum on the fact that Obama has nominated a Jew hater and Israel basher to serve as the next Defense Secretary. As I've said before, Hagel's appointment is a far greater threat to the US military than it is to Israel. But still, it is pretty obscene that Obama is getting away with appointing this character to serve as the Pentagon chief.

Today, the estimable Adam Kredo at the Washington Free Beacon reported another classic Hagelian anti-Israel slur and libel. Back in 2003 he gave an interview to his hometown paper saying that Israel "keep[s] the Palestinians caged up like animals." 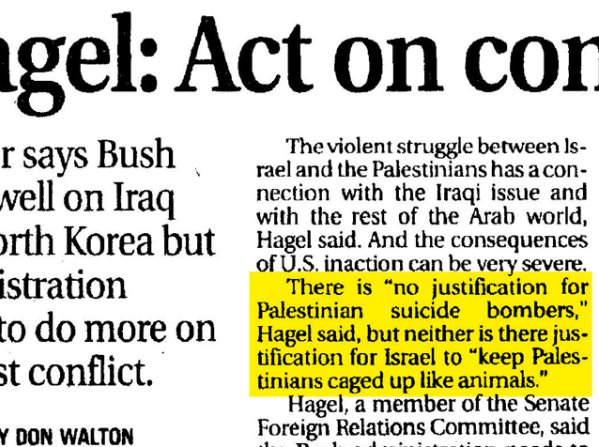 And of course, this is only one of countless examples of Hagel's animus towards the Jewish state and its Jewish supporters in the US... Israel is better off expanding its own defense industries than depending on Hagel for spare parts.

As to the US military, ...the movement to assign women to frontline combat unit is not about advancing women. It is about destroying the US military. The fact that Obama didn't even need for Hagel to enter office before taking his first swipe at the military shows just how grandiose his plans for gutting US military capabilities in his second term are.

To be clear, as a woman who served as an officer in the IDF for 5 and a half years, and worked as an embedded reporter with an all male US infantry unit in Iraq, I have to say that I don't think there is anything inherently wrong with women serving in combat. But the purpose of last week's decision wasn't about permitting women to fight on the battlefield. They already do. It was about social engineering and weakening the esprit d'corps of the US military. As Saul Alinsky taught his followers the goal is never what you say it is. The goal is always the revolution.

Delegitimizing and weakening Israel is only one part of the "revolution." Israel will survive Obama and Hagel and Kerry and Brennan.

But that doesn't mean we and our supporters in the US should keep silent about their hostility just because we know we can't block their appointments. By pointing out their radicalism, we are at a minimum sending out the necessary warning about what their future plans will likely involve. And that is important, because the more they are criticized the weaker they will feel.