The sad truth about Social Security

Please hide this particular article from any young hopenchangers who suffer from the delusion that Social Security will be around when they're ready to retire.

Social security is not earned retirement income, an entitlement nor a benefit. 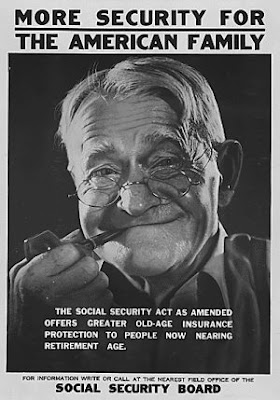 ...However, in the 1960 case of Fleming v. Nestor, the U.S. Supreme Court ruled that workers have no legally binding contractual rights to their Social Security benefits, and that those benefits can be cut or even eliminated at any time.

The Court’s decision was not surprising. In an earlier case, Helvering v. Davis (1937), the Court had ruled that Social Security was not a contributory insurance program, saying, “The proceeds of both the employee and employer taxes are to be paid into the Treasury like any other internal revenue generally, and are not earmarked in any way.”

Unfortunately for the drones (i.e., the Obama Cultists), the math always defeats the political rhetoric. Always. And the fuse on the fiscal time-bomb is fizzling away, without any of our leaders making the slightest effort to douse it.

by referring to Social Security taxes as “contributions,” as in the Federal Insurance Contribution Act...

Which reminds me that just the other day I heard the Obamacare penalty/tax called by its original name: