Yep, this is what you call Presidential Front-runner Material™ for the Democrat Party!

I guess they had to read the legislation eventually to find out what was in it.

These people are dangerously stupid. Not a single person stopped to think about whether any of these meaningless laws would affect the police? F***ing idiots. 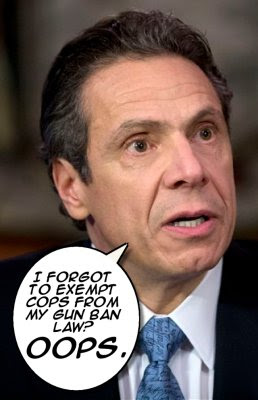 It appears someone forgot to exempt police officers from the ban of ammunition clips with more than 7 bullets in New York State’s new gun control law...

...It’s a big oversight that apparently happened in the haste by the Cuomo Administration to get a tough package of gun-control measures signed into law...

On Tuesday, Governor Andrew Cuomo signed the sweeping gun measure, the nation’s toughest. It includes a ban on the possession of high-capacity magazines... magazines with more than 7 rounds will be illegal under the new law.

The problem as the statute is currently written does NOT exempt law enforcement officers... The NYPD, the State Police and virtually every law enforcement agency in the state carry 9-milli-meter guns, which have a 15-round capacity.

Unless an exemption is added by the time the law takes effect in March, police would technically be in violation of the new gun measure

.
Abject stupidity, but entirely predictable. We surmise if anyone actually asked Cuomo he’d have no idea what the police carry. And don’t forget, this is the same guy who said he could “overpower the extremists” with “intelligence and with reason and with common sense.”

What else would you expect from Andrew "the Architect of Ruin" Cuomo, the man who touched off the mortgage meltdown?

I'm not sure they forgot it - they probably just wanted to make it more fair for the criminals. That's Lefty Logic!

the uglyness of this guy isn't just on the surface

This talk about law enforcement exception talk pisses me off. There should never be exemptions for law enforcement. Half of them are pushing for restriction of rights as the enemy!

Sadly, this has become the norm, especially in Congress. Our self-appointed (idiot elected) rulers in DC have come to the point where they pass mere frameworks of bills based on concepts and then go back and fill in the blanks with whatever the hell they want. It should be grounds for impeachment and getting banned from the halls of DC. There will be more of this chicanery and it will get worse until someone uses the courts as the Left does to affect change. We clearly aren't smart enough to do it at the voting booth.

-- Unless an exemption is added by the time the law takes effect in March, police would technically be in violation of the new gun measure --

"Technically?" How about "Actually?"

This move has made the New York State Legislature look like a pack of fools...which in a way is the best service a governor could have done for us!

This guy is starting to resemble Bela Lugosi in his heroin years.But I don't want to slur someone based on looks,that's unfair.So I'll just say he's the greatest moron elected to a governorship since his father.

After 25 years of law enforcement, the thought that I was protecting people like this made me nauseous. I'm so glad to be out. In fact every time I see a hate cop rant- which is often- I am so glad I don't have to give it up for people like that.

NY is full of leftists, statists, and bankers. Not exactly my type of folks. Glad to be in my own private Idaho. With gun owners and cops with 15 round mags.

Cuomo (Obama's political twin) has just put forth an extreme abortion policy that shocks even Democrats.

This is the Progressives' War on Children.