Look up carlust in the dictionary and you may see this tight little number:

You could imagine it going on sale looking just like this, when it reaches showrooms in about two years from now. Honda’s people weren’t giving much else away, but we’ll eat our origami swans if it doesn’t have the petrol-electric powertrain and 4WD we speculated on last year. The petrol engine, mostly likely a 3.5-litre V6 with 400bhp, will be correctly placed in the middle of the car and power the rear wheels. Then there are two electric motors up front: one for each wheel, operating independently to sniff out grip and see-off understeer, plus another one in the transmission at the rear to boost engine power when asked. Together, the electric motors will most probably add about 100bhp to the powertrain, bringing the new NSX to 500bhp overall. 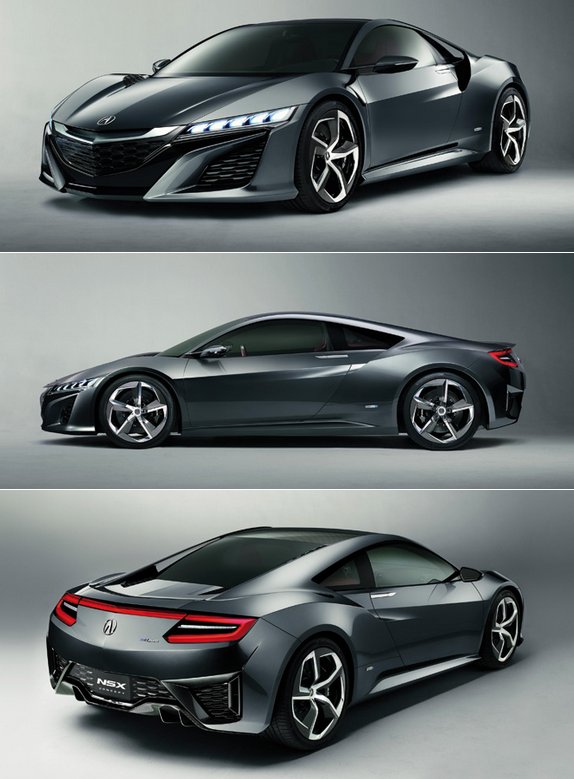 This version – probably one or two steps away from the final production model – is also slightly smaller than before, but we’re talking about a few millimeters trimmed here and there. Overall, the proportions are as low and taut as an Audi R8. In fact, standing beside it, with the roofline just above your waist, it’s hard to fathom how they’ve crammed all those motors inside. If it stays like this, you could be looking at one of the most exciting cars we’ll drive this decade.

Excuse me for a second. I think I may have soiled myself.

at 9:18 PM
Email ThisBlogThis!Share to TwitterShare to FacebookShare to Pinterest
Labels: Autos