The name Egan-Jones may be familiar because it is a rating agency that has downgraded the debt of the United States at a far more realistic aggressive pace than its more compliant well-known peers like Standard & Poor's. Like this:

The real headline: "SEC Bars Egan-Jones From Rating The US And Other Governments For 18 Months." 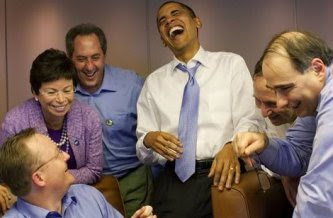 The Securities and Exchange Commission said on Tuesday that Egan-Jones, the upstart credit ratings firm run by Sean Egan, had agreed to an 18-month ban from rating asset-backed and government securities issuers as a nationally recognized statistical rating organization.

The agreement settles accusations that the firm made misstatements about its record when applying for a government designation, the S.E.C. said.

“Accuracy and transparency in the registration process are essential to the commission’s oversight of credit rating agencies,” Robert Khuzami, director of the S.E.C.’s division of enforcement, said in a statement.

But don't think of this step by the SEC as payback for dissing the Obama administration's reckless economic policies; consider it a mere coincidence.

Yeah, nice credit rating business ya got there bub, be a shame if yaknow, anything untoward were to befall it.
MM

I feel as though I have been teleported into a parallel dimension only in this dimension Slavery is Freedom and all that.

I question the timing