HOW COOL IS THIS? First Grader Becomes Youngest Person Ever to Develop a Mobile Game

What were you doing in the first grade?

Remember the name Zora Ball. At seven years old, she's the youngest person to ever create a mobile game app, which was unveiled at the University of Pennsylvania's Bootstrap Expo last month. 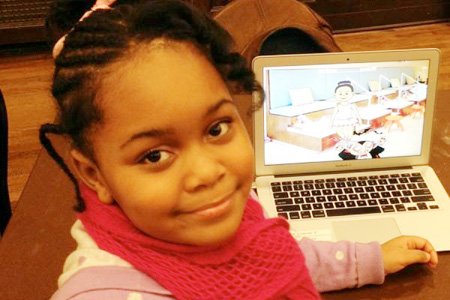 Zora used the Bootstrap programming language, and lest you think her older brother Trace, who was a STEM scholar of the year at Zora's charter school, did the work for her, she reconfigured her app on the fly when asked, according to the Pittsburgh Courier.

This could be the beginning of a long career as a programmer and developer for Ball. But first she has to get through first grade.

Isn't it startling to consider that -- like Zora -- humanity remains in the infancy stage when it comes to computers? What will the next five or so decades bring? Or, for that matter, the next five years?

at 11:29 AM
Email ThisBlogThis!Share to TwitterShare to FacebookShare to Pinterest
Labels: Education, Mobile, Scitech