BUT YOU STILL NEED TO DRIVE A SMART CART, PEON: China's record-level air pollution, as seen from space

Perhaps someone could alert "Richard Windsor" to this breaking story: 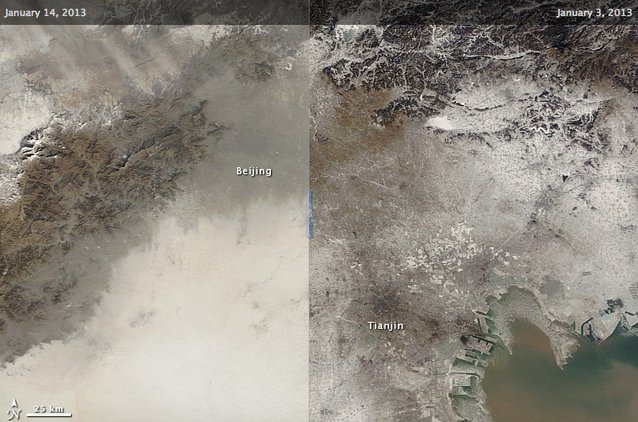 NASA's Earth Observatory this week released startling before-and-after photos of northeastern China, where residents in Beijing and other cities have been suffering from suffocating levels of smog and air pollution. The satellite images, embedded below, were taken from the same position in space, 11 days apart; the top photo was captured on January 14th, the bottom on January 3rd.

As the images make clear, Beijing has seen increased haze, cloud, and fog coverage over this period, though these formations are far from typical...

...Perhaps most terrifying, though, is the fact that NASA's images weren't even taken at the height of China's smog crisis. When the January 14th photo was captured, Beijing's air quality index (AQI) stood at 341 — well above the 300 AQI threshold at which air is considered to be hazardous to all humans, but far below the city's high point. Conditions reached a nadir, in fact, on January 12th, when the AQI in Beijing reached a staggering 775. According to independent air quality monitors at the US Embassy, PM2.5 particle pollution readings in Beijing over the weekend were literally "beyond index."

Red China has yet to address its catastrophic environmental problems, which dwarf those of the U.S. in every way imaginable. Despite this, the Obama EPA is completely out of control, issuing regulations, shutting down businesses, and violating sunshine laws (as evidenced by the unlawful email scam that led to the resignation of EPA chief Lisa Jackson).

How long before that crappy air reaches California?

We've driven out all sorts of businesses from the state due to excessive environmental regulation. How many of those jobs were taken by the Chinese?