The Infiniti Q50 -- the forthcoming replacement for the G37...

Personally, I would take a rain-check on the reported hybrid and diesel nonsense:

Feast your eyes upon the all-new 2014 Infiniti Q50. Say what you will about Infiniti's new Q and QX naming system, but after looking at the new Q50 unveiled today at the Detroit Auto Show and checking out its feature list, we're having a hard time coming up with any additional criticisms. The highlights of the Q50, which goes on sale this summer in the US, include the eye-catching design, innovative cabin technology and a fuel-efficient hybrid model.

The Infiniti G has always had a focus on leading-edge styling, and its replacement is no different... Compared to the current G Sedan, the Q50 is longer, wider and lower than its predecessor, and it's also more aerodynamic with a drag coefficient of just 0.26, putting in between the Chevrolet Volt (0.28) and the Toyota Prius (0.25). 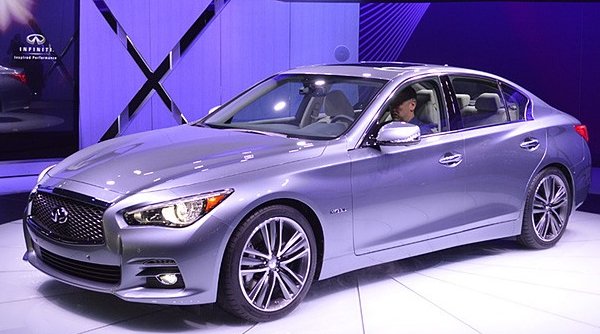 ...There are also numerous apps that come preloaded into the system, and a new i-Key feature allows the car to recognize up to four different keys, allowing each driver to customize as many as 96 vehicle settings. As for the rest of the interior, it gets the same styling we've come to expect from Infiniti.

The base engine for the Q50 is carried over from the G37 with a 3.7-liter V6 producing 328 horsepower and 269 pound feet of torque, but the big news in the powertrain department is the addition of a hybrid model. Using a similar system to what is now known as the M35h (soon to go by the Q70 name), the Q50 Hybrid is powered by a 3.5-liter V6 paired to a 50 kW motor and compact lithium ion battery to give a total power output of 354 hp. Fuel economy estimates were not released for the hybrid, but in the M35h, this system is rated at 27 mpg city and 32 mpg highway; being newer and lighter, we wouldn't be surprised to see much better numbers for the Q50 version. Both versions of the car use a seven-speed automatic with rev matching, and the Q50 will come standard with rear-wheel drive and offer all-wheel drive as an option. Additional powertrains will eventually be added for global markets, but these have not been announced either.

A separate report last week confirms that the G37 Coupe will be replaced with a Q50 iteration, but photos of said configuration are scarce indeed.

at 9:27 PM
Email ThisBlogThis!Share to TwitterShare to FacebookShare to Pinterest
Labels: Autos, Engineering

Darn, at first I thought this was going to be a Bernanke-Krugman joke about a car made from $100 bills, the Infifity QE5