What can and must be done about the media

An important post at Ace of Spades deserves our focused attention. Its title -- "We Must Do Something About The Media" -- hints at some trademark snark, but its theme is deadly serious.

I've mentioned this before, but I'm truly alarmed about it: What we are witnessing is the full and seamless fusion of media power with government power.

...The media no longer hides it in their actions. They are fully fused with the Obama Administration and DNC. The only way in which they do hide it is by simply lying when confronted about it: They'll issue a snide denial, then go about doing precisely what it is they were accused of doing.

...it is dangerous and ultimately fatal for democracy for media power to fuse with government power, that the adversarial press is vital. 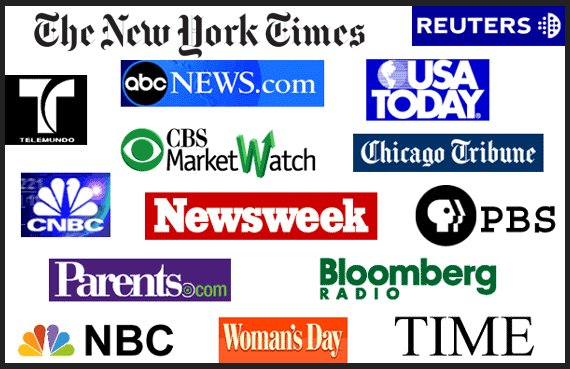 ...The media considers its adversarial function to consist of serving as adversaries to critics of Obama and the Democrats; thus Terry Moran shaming himself by rushing out to ask what right a Senator has to question the Secretary of State on matters of foreign policy.

...This is dark, and dangerous, and will lead to horrors. It always has [led] to horrors before.

...Consider: The government locked up a filmmaker because the filmmaker expressed his free speech rights in a way the president found politically problematic. Not only has the press shown no fears about this, they've actively campaigned for the man's jailing.

That's frightening. Even if you come down on the side that the guy did what he's accused of and all that... to have absolutely no trepidation about the government jailing people primarily for their Speech Crimes? That's something.

...I don't think I'm being alarmist. At every point in history when media power has fused with government power -- whether involuntarily or, for one of the first times in history, now voluntarily -- it has resulted in disaster and misery.

So do we just sit there and take it? I'm no genius, but here are a few ideas for actions that each of us can take: 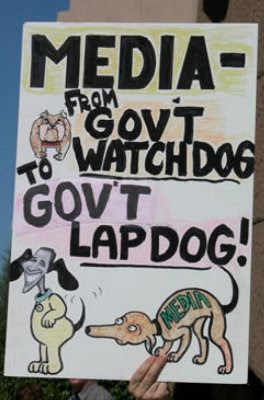 • If you have a subscription to any newspaper that advances the Statist agenda -- The New York Times, The Washington Post, The Boston Globe foremost among them -- cancel that subscription. Enthusiastically encourage subscribers you know to cancel as well, even if they have no particular ideological bent. Tell them they can save money by reading the news on their iPad.

• For television, ignore all news programs save those on the Fox News Channel. Your cable box is likely sending your viewing information back to corporate headquarters. So don't give any ratings whatsoever to any of the alphabet channels' news program, or their insipid Sunday Talk Shows, or any of their propaganda efforts. Don't watch any of the Statist media's news shows. Ratings matter -- and each one of us can make a difference.

• Support new media outlets like PJTV by signing up or offering financial assistance.

• Don't take your favorite blogs and news sites for granted: many sites offer a voluntary "subscription" donation via PayPal. Even very small donations can help (and, no, that's not a personal bleg).

If you agree, tell your family members, friends and like-minded colleagues about the plan. It's time to stick it to the government's media complex. Each of us can make a difference.

I've been saying this stuff for years. Writing it at every website's comment section I can stand to participate in.

Until the right starts treating the New York Times and the LA Times and other "bastions" of journalism as the absolute equivalent to Worker's World or True Murder Mysteries, they will always be owned by the media.

Beck may be a bit off, but at least he's doing something about this. So I subscribe to his channel on Dish Network. He drives me crazy with his waffling, but he's far better than CNN, Fox, and the rest.

you have to CANCEL subscription to cable/satellite tv.

from annbarnhardt:
I caught an interesting factoid while reading a story about Algore selling his Marxist agitprop cable station to Al Jazeera last week. When it was first reported that Gore was selling CurrentTV, it was reported that CurrentTV received cable and satellite licensing revenues of $0.12 per month per subscriber - that is the pinch of incense you people who had CurrentTV included in your cable/sat package were paying to Algore. It mattered not that you never, ever turned CurrentTV on, or even knew that it was included in your package. Your $0.12 per month multiplied together put $80 million per year in cashflows into Algore's hands in order to spread his evil, satanic filth.

turn off the money faucet

If Sarah Palin isn't good enough for Fox news, but bob beckel & juan williams are, Fox is no different to me than msnbc.

How about just read small blogs? Money not required but comments would be great. Boy, does it get discouraging.

With the exception of "For television, ignore all news programs save those on the Fox News Channel" I'm all in.

IMO, Fox is little different than the alphabet stations, leaning more left with each passing year. Hiring Kucinich was the final straw.

And cutting out the comments from their internet site finished them for me there, as well. They used to be my home page ~ now I don't even visit their site. By silencing the opinions of conservatives they greatly helped the leftist agenda.

I am flabergasted at the current events. They want to disarm patriots and Christians while they actually arm Mexican drug gangs and Muslum Terrorist in Egypt and Syria. I could go on but we live in upside down land. Right is wrong and good is bad, it is wild.

We need a plan. I started one in about 3 minutes came up with about 5 ideas. Others need to add some more but the war for America is on and we need to join the battle. The people that started this country walked barefooted in the snow to fight the British. We need to take action now to avoid that later.

Here are some quick ideas.

1-Turn off your TV. The mainstream media is totally dishonest and suporting the other side. The rest of the channels are mostly TRASH.

3-The public education system is a total failure OR worse. Your kids are being brainwashed for progressive utopia instead of being educated. We still have a few freedoms left - get ALL of your kids or grandkids into a good christian private school tomorrow morning. This is important do it now.

4-Buy American manufactured products. Stop shopping at Walmart. I am not against Walmart much but you might as well just send your money to China because that is all Walmart sells is China products. Buy American goods before the deficit bankrupts us.

5-It is sucidal to allow people that are on welfare or foodstamps to get to help choose the leader of the free world. I would also include all felons and all governnment employees. These people have a direct conflict with our conservitave agenda. Any Fortune 500 company that allowed homeless people to vote to direct the company management would go out of business eventually. Highly educated successful people often struggle to run a company. You have to have some skin in the game to vote and an ID you crooks.

OK that is a start. Time to take the threats serious. They Do.

Dont forget to contact sponsors and complain to them too. This really does work, especially if we all did it.

Even FOX does not tell the truth, whole truth and nothing but the truth - factual evidence, reason, logic.

I watched FOX during the primary debates and heard the after-debate 'analysts' tell outright lies and spew pre-fab talking points at the audience non-stop. What they said was not what the candidates said.

All cable news sources seem to want to do our thinking for us and shape opinion...and that's what they are being paid to do - by sponsors, owners, people in office, foreign interests, large business interest and/or activist groups, etc.