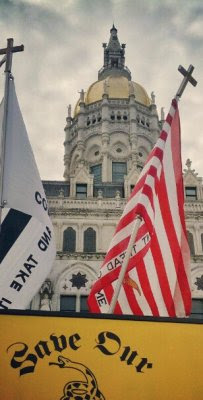 They Hate Us, They Really Hate Us: Driscoll
CBS News Political Director: Obama ‘Must Go for the Throat,’ ‘Pulverize’ & ‘Declare War’ on the GOP: Blaze
Immaculate Election Redux: The Regurguration: VictoryGirls

Disaster: All American hostages in Algeria reported killed: Creeping
UN Gun Grab on Pace for March: NewAm
Caterpillar Punked By Chinese Fraud, To Write Off Half Of Q4 Earnings: ZH

Why Are Chimps Stronger Than Humans?: SciAm
The First Car Phone Was The Civil War Telegraph Wagon: Jalopnik
There Is Now A Socially Acceptable Way To Call Someone Ugly Or Attractive, And It's Sweeping Colleges: Insider

QOTD: "Every GOP guest on Face The Nation should ask Bob Schieffer if he agrees with his political director that the GOP needs to be destroyed." (Hot Air commenter 'Commodore' via Ed Driscoll)

"HEADLIGHTS ON to protest the inauguration of Barack Obama and the decline of America: ALL DAY, Monday, January 21, 2013. Join fellow American patriots and Image Blitz! Leave your headlights on all day if you're tired of government and news media corruption, the staggering unemployment rate, the 16 trillion dollar debt, the Fast & Furious scandal, the Benghazi cover-up, out of control spending, and Obamacare!"
http://www.facebook.com/photo.php?fbid=211568078968121