The hypocrisy, it burns.

A staffer at left-wing Media Matters for America committed numerous felonies in the District of Columbia and around the country by carrying a firearm to defend the organization’s founder, David Brock, The Daily Caller has learned.

According to a knowledgeable source, multiple firearms used to protect the Media Matters founder were purchased with Brock’s blessing — and apparently with the group’s money.

TheDC has previously reported that Brock’s one-time aide, Haydn Price-Morris, carried a concealed Glock handgun as he traveled with the liberal leader to public events in Washington, D.C. 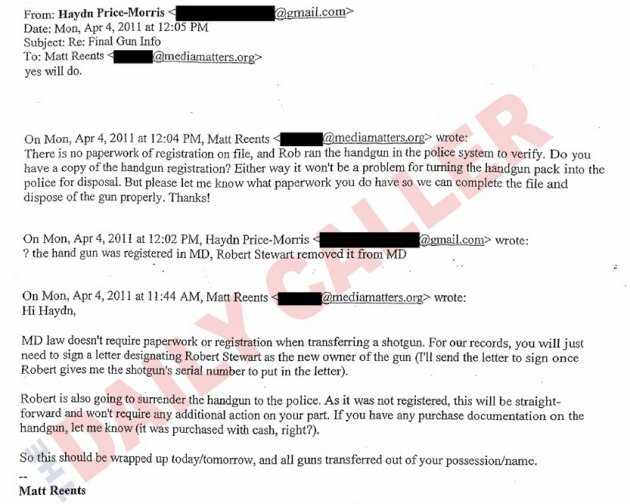 ...Price-Morris was regularly armed when accompanying Brock on trips around the country, according to a source, and his firearm possession in Washington, D.C. constituted multiple felonies.

On at least one occasion, Brock — accompanied by his armed aide — visited California to attend a “Democracy Alliance” summit of major Democratic donors and lawmakers.

Just when you think the hard left Democrat Party can't become any more hypocritical, they warp the space-time continuum and create brand new dimensions of sleaze.

Suffice it to say that Media Matters' felonious activities will go unpunished, presumably through the same "talk show loophole" that protects David Gregory.

Remember folks: we're the rabble. They're the elites. Laws don't matter for them, just as arithmetic, history, logic, facts and reason are irrelevant to the suicidal policies of the Democrats.

Move along folks, nothing to see here.