Thank goodness concealed carry is forbidden in New York City! Otherwise, law-abiding citizens could have come to the aid of a tourist who was being beaten within an inch of his life. And golly gee, isn't it great that a tourist licensed in another state can't be trusted to safely carry in New York?

And thank heavens for the governor's creation of a human hunting preserve in New York, where innocents are easy prey for criminals.

A tourist from Massachusetts was recovering at a New York City hospital after being brutally beaten by a gang of seven young men armed with a tire iron and a baseball bat, police today revealed.

Kevin McCarron, 24, from Andover, was battered and stomped unconscious by the men after an argument in the trendy Greenwich Village neighborhood of Manhattan early Sunday... An onlooker captured horrific cell phone video of the attack, showing several young men kicking the victim on the ground. 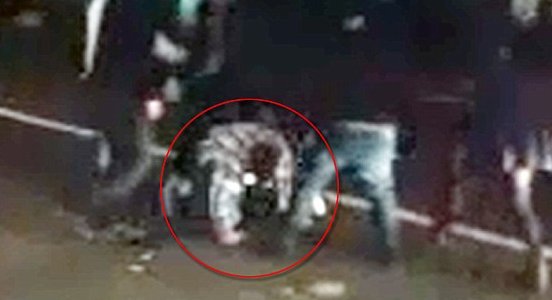 ...McCarron is seen struggling to stand as the group of thugs pummel hims with kicks and punches. At least one of the men is armed with an aluminum baseball bat, which he raises to batter the helpless victim.

Militant Quakers are to blame, no doubt.


Hat tip: I Hate the Media.

If you want to see the future of a totally disarmed populace, look no further than Great Britain where the libtard disarming fantasy is being followed to its ridiculous conclusion.
A sense of morals, 2 parent family life, and isolating those whose religion says it's okay to do whatever they want to infidels may solve the problem. I fear we are too far gone into a lazy handout based society with an educational system designed to continue the mess they've created to be fixed. I hope I am wrong but I fear I am not.

These are Obama's sons and Holder's people.