The modern sporting rifle, based on the AR-15 platform, is widely misunderstood. Why? Confusion exists because while these rifles may cosmetically look like military rifles, they do not function the same way. Also, groups wanting to ban these rifles have for years purposely or through ignorance spread misinformation about them to aid their cause. 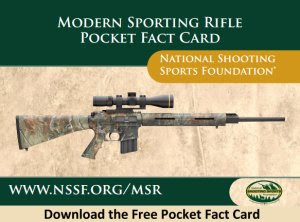 The National Shooting Sports Foundation asks you to be an informed gun owner and to use the following facts to correct misconceptions about these rifles. Remember, that if AR-15-style modern sporting rifles are banned, your favorite traditional-looking hunting or target shooting semi-automatic firearm could be banned, too.

• AR-15-platform rifles are among the most popular firearms being sold. They are today's modern sporting rifle.

• The AR in "AR-15" rifle stands for ArmaLite rifle, after the company that developed it in the 1950s. "AR" does NOT stand for "assault rifle" or "automatic rifle."

• AR-15-style rifles are NOT "assault weapons" or "assault rifles." An assault rifle is fully automatic -- a machine gun. Automatic firearms have been severely restricted from civilian ownership since 1934.

• If someone calls an AR-15-style rifle an "assault weapon," he or she either supports banning these firearms or does not understand their function and sporting use, or both. Please correct them. "Assault weapon" is a political term created by California anti-gun legislators to ban some semi-automatic rifles there in the 1980s.

• AR-15-style rifles look like military rifles, such as the M-16, but function like other semi-automatic civilian sporting firearms, firing only one round with each pull of the trigger.

• Versions of modern sporting rifles are legal to own in all 50 states, provided the purchaser passes the mandatory FBI background check required for all retail firearm purchasers.

• Since the 19th century, civilian sporting rifles have evolved from their military predecessors. The modern sporting rifle simply follows that tradition.

• These rifles are used for many different types of hunting, from varmint to big game. And they're used for target shooting in the national matches.

• AR-15-style rifles are no more powerful than other hunting rifles of the same caliber and in most cases are chambered in calibers less powerful than common big-game hunting cartridges like the 30-06 Springfield and .300 Win. Mag.

• The AR-15 platform is modular. Owners like being able to affix different "uppers" (the barrel and chamber) to the "lower" (the grip, stock).

And, they are a lot of fun to shoot!

Thank you! Why can't even middle of the road journalists comprehend this?

When you say "Liberal ignoramuses", are you referring to those who believe Unicorns, Leprechauns, Elves, Fairies, and Bigfoot exist, Elvis is still alive, the moon landing was fake, 9/11 was an inside job, and "green energy" is harmless?