I wonder how many Ruby Ridge incidents this blatant attack on the Constitution would have touched off? New York State Assemblyman Steve McLaughlin explains:

Here it is. This is the video where I was asked to keep the Democrat proposals for the NY SAFE Act away from the public. This list was given to me by a colleague and it is not confidential. 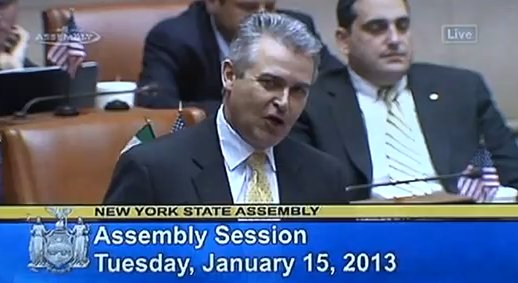 This bill was an attack on the 2nd amendment and the Democrats clearly wanted to dismantle the work of the Founding Fathers. None of these amendments were included in the final bill thanks to us fighting back. I will not stand silent while these unpatriotic proposals are pathetically thrown at us a 11 o’clock at night:

1. Confiscation of "assault weapons"
2. Confiscation [of] ten round clips
3. Statewide database for ALL Guns
4. Continue to allow pistol permit holder's information to be [revealed] to the public
5. Label semiautomatic shotguns with more than 5 rounds or pistol grips as "assault weapons”
6. Limit the number of rounds in a magazine to 5 and confiscation and forfeiture of banned magazines
7. Limit possession to no more than two (2) magazines
8. Limit purchase of guns to one gun per person per month
9. Require re-licensing of all pistol permit owners
10. Require renewal of all pistol permits every five years
11. State issued pistol permits
12. Micro-stamping of all guns in New York State
13. Require licensing of all gun ammo dealers
14. Mandatory locking of guns at home
15. Fee for licensing, registering weapons

We know precisely what Democrats want: they seek to confiscate all firearms from law-abiding citizens, leaving only the state (and criminals) with a monopoly on force. These people are precisely the would-be tyrants our Founders feared, and on whom they placed explicit constraints as they designed the Constitution.

These Democrats are your prototypical, power-hungry elitists who despise the very citizenry they purport to serve.

Well, here it is: I'm labeling every current member of the Democrat Party an assault weapon on the Constitution.

at 10:29 AM
Email ThisBlogThis!Share to TwitterShare to FacebookShare to Pinterest
Labels: Crime, Cuomo, Democrats, extremism, Firearms

Who do you democrats know that is foolish enough to try and confiscate guns from anyone? You don't value anyone's life or safety do you? And since it won't be any of you gutless swine going door to door, you really don't care. You are cowards and traitors and you make me sick.

Well boys, when they try it youd be better be ready to.march.