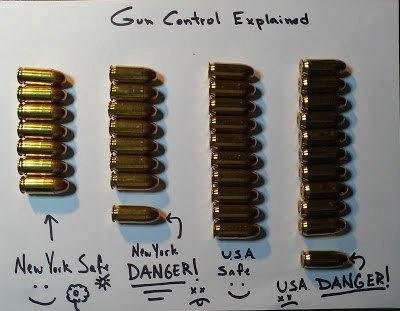 Don't know about you, but I feel much safer now.

The Democrat theory is that after shooting 7 or 10 rounds, the shooter would have to change magazines. At that moment, brave teachers could rush the shooter and hit him with a purse, then wrestle him to the ground.

Well, unless the shooter brings two guns, in which case he only needs one second to grab gun #2 and kill the first brave teacher. But then, he would only have 6-9 more shots before the second brave teacher could rush him and wrestle him to the ground.

Well, unless he also has a knife, to dispatch the second teacher, then take 3 seconds to install a new magazine. Then the shooter would only have 7-10 shots before the third brave teacher rushes in.

Well, unless he ignored the law, and had 30 round magazines from the start. So, counting his shots is no good, and rushing the shooter seems to be a bad option.

Even if a teacher or visitor is armed, then the good guys only have 7-10 shots, and probably they are not carrying two guns or magazines. So, they should be careful to be calm and aim well.

What about encouraging teachers to be armed? The Dems don't want children to grow up in a police state where they may be near firearms throughout their lives. Dems think it is better, it seems, to live in fear of being defenseless, confident that these shootings don't happen often enough to be worrisome. Sorry, that doesn't make sense. How did I get to that position?

Two brave teachers did rush the shooter in the Newtowne shooting, and they were killed. I do not mock their brave actions, and find their sacrifice selfless and amazing. It would have been so much better if they had been armed, and could have expressed their bravery in a way which would have had a high probability of killing the shooter instead of only making themselves easy targets.

Actually I though this was Biden's recommendations ........:-D

The original source for that photo comes from here:

Criminals aren't limited to one state where they can buy magazines and ammunition. I hope the citizens of NY enjoy owning half-empty firearms. It's their right to have "feel-good" laws that do nothing. It's my right to have every tactical advantage over someone who's breaking into my home, posing a threat to my family. Police are not always the "first responders" in home invasions...it's the homeowners! Now why would officers need 13-15 rounds of ammunition in their pistol? Roughly one third of bullets fired by the NYPD hit their intended target, and it's no myth that it often takes multiple hits to stop violent aggressors. Causing massive shock trauma and/or direct hits to the central nervous system are crucial to saving innocent lives. This new legislation completely disrespects lives of law-abiding citizens, because apparently stacking the odds AGAINST criminals is dangerous to our society. We have the right to DEFEND life, liberty, and the pursuit of happiness. Grow a spine and defend what is rightfully yours.