NBC is America's answer to the Soviet Union's Pravda. It serves as an unofficial public relations arm of the Obama administration. It has been caught -- on numerous occasions (e.g., here, here, and here) -- editing video and audio clips to advance the Statist agenda.

And it routinely censors news. Like today, when President Obama's nominee for SECDEF, Chuck Hagel, beclowned himself in a Senate hearing that was, by turns, embarrassing and horrifying.

And how did NBC handle Hagel's denouement? 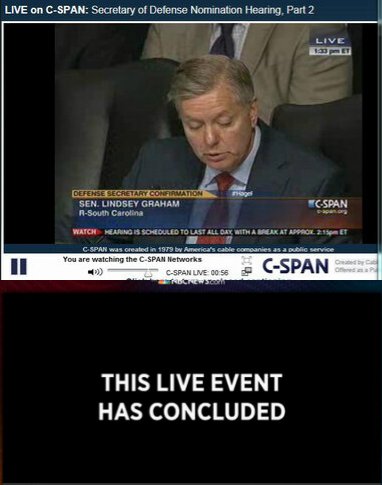 When the going got tough -- for instance, when Lindsey Graham eviscerated Hagel's "Jewish Lobby" nonsense -- NBC simply blacked out the disastrous performance.

That didn't stop the hemorrhaging; even the progressive kooks are disgusted with what must be the worst confirmation hearing on record. The only way this dim, prejudiced, and terrorist-appreciating hack should get into the Pentagon is with a ticket for one of their guided public tours.

Lighten up on them, they are only trying to keep pace with the Communist Nuts Network. The (sub)standard was set a decade ago by Dan Blather. If you want to mock every thing stupid and evil they do, you will need several more blogs.

Jon Stewart got out his gay voice for Lindsey Graham--something he'd never do to any Democrat.

As expected, MSNBC and the "brilliant" comedy duo of Jon Stewart and Stephen Colbert failed to even mention the scandal with Sen. Bob Menendez (D-NJ) and underage Dominican hookers. Don't you know that if the name had been John McCain (R-AZ), this story would have opened every show?

The bias is getting worse right before our eyes.

It's getting closer and closer, I hope your prepared, because they are, and they expect it.......

The Hearing they didn't want us to hear.