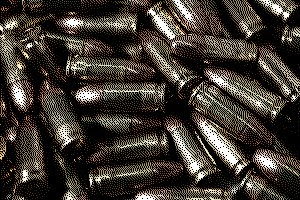 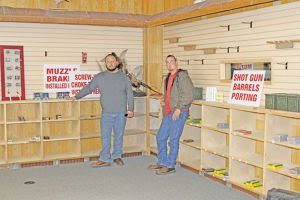 I don't buy that this is just a civilian run on guns. This is the military and civilian sector government gun and ammunition buying. How many billions in "stimulus" has just gone up in smoke?

You think gun makers care? Especially if they believe they are going to be taken over anyway? Get what they can get and sell out.

So who gets priority - DHS or citizens?

So the gun industry is pumping the
Govt orders out way before citizens
even get a chance at it?
Matthew 10:36
36 and a man’s enemies will be members of his own household.

Civilians third in line? Interesting concept. Time to switch gears and think outside the box. Never under estimate the crazy power of a person who has nothing to lose that is wielding a Stihl chainsaw in one hand and a SOG tomahawk in the other.
In Liberty,
Israel
III

Who are the bolt carriers that don't have enough capacity? I work for a steel company that was just up in Vegas trying to break in this industry. We have capacity to make bolts made with 4140 steel. Can anyone lead me in the right direction?

A lot of the manufacturers our on linkedin. also the NRA show coming in a few month, it is more of a consumer show and I found it is easier there to talk bizz than at SHOT I also might know a few people to call

25217 Government did not empty every ammo sale shelf in America. Government caused private citizens to empty the shelfs.

You guys really need to check and get the facts.

Being as old as dirt I never thought I would see a 22 rounds sell for 20 cents each like I see on the internet auctions.
Only a tiny fraction of the population understand these implications . When more wake up ammo will be like Unobtainiam All the ammo you have now is part of your legacy. Gone are days of 1000 round shoot offs.

For the love of GOD, PLEASE stop using apostrophes to make words plural.

what is the source of your data?

The Governments plan for gun control is to get all the guns off the shelfs and tap out all the resources by creating a scare thus causing a run on all things guns, and then pass a gun "take-up" law and collect all the guns owned by private citizens. They will be able to find all the gun owners via registration records and send them all notices to turn in their guns or have them confiscated and be prosecuted - Guns gone!

IT MUST BE A CONSPIRACY! THE ARABS ARE COMING! THE MEXICANS ARE COMING! THE TERRORISTS ARE EVERYWHERE! GRAB YOUR GUNS AND AMMO AND LOCK YOURSELVES IN YOUR BUNKERS. WE'LL LET YOU KNOW WHEN IT'S SAFE TO COME OUT.

I would like to spread the word but I need references to varify that this is true and so that the people I send it to can also varify for themselves.

What was it that Charlton Heston said while holding a rifle above his head and pledging that he would never surrender it--they would have to pry it out of "my cold dead hands". Hear that assobama...............

Is this "report" valid? No one I know in the industry can confirm this "status of industry" summary.

Pretty basic stuff... Same applies to guns. Demand greatly exceeded supply. Going to take a while to catch up...

From Gary Marbut, President of the Montana Shooting Sports Association

Dear MSSA Friends,
I want to inform you about what I think is the most serious threat to our right to Keep and Bear Arms in the U.S. today, MUCH more serious and real than anything Obama or Senator Diane Feinstein can hope to get through Congress.

The sole two facilities in the U.S. are the General Dynamics plant in St. Marks, Florida, and the Alliant/ATK plant in Connecticut. Both General Dynamics and Alliant/AYK are giant government contractors. They make aircraft carriers, space vehicles and other VERY high-dollar stuff for the U.S. government.

I’m warning you now that our RKBA could be sunk administratively if we don’t do something about it, NOW. I’m sounding the alarm!

That’s why I’ve written HB 468, which will be up for public hearing before the Montana House Taxation Committee this coming Thursday. HB 468 is designed to encourage the production of smokeless powder, small arms primers, and cartridge brass in Montana.

Why is this encouragement needed? There are serious scale issues with the production of powder (and primers and brass, but especially powder). That’s why there are only two powder manufacturers in the U.S. today. All of the small countries of Eastern Europe manufacture their own smokeless powder, but that manufacture is heavily subsidized by the state as a matter of state security, subsidized to overcome the scale issues.

We will speak of HB 468 primarily as a jobs bill – that it will hopefully create jobs in Montana, jobs we don’t have now and we hope HB 468 will stimulate.

HB 468 costs Montana NOTHING in terms of lost revenue, because there are no such businesses in Montana today (and I specifically did not include bullet or finished ammo manufacturers so I could pitch this to the Legislature as revenue-neutral).

Does HB 468 actually sweeten the opportunity enough to stimulate the desired businesses here and overcome the scale issues? Honestly, I don’t know for sure. It’s my best first shot.

I only know that we’d danged well better do something to interdict this catastrophic threat to our RKBA. If I can foresee this threat, the would-be tyrants can foresee it too and act on it.

I REALLY hope those of you who share my concern will make the effort to show up in Helena on Thursday to speak for HB 468 before the House Taxation Committee. It will meet at 9 AM. If you simply cannot be there, send messages to committee members.