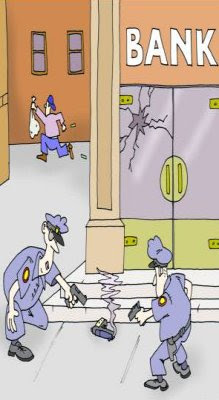 The War Between the Amendments: Hanson
Guns Don’t Kill People, The Mentally Ill Do: Coulter
Okay, Now It's Fascism: WyBlog

California: ‘This is What a Blue Death Spiral Looks Like’: Driscoll
It’s Not The GOP’s Fault It Is Useless But It Is Useless: Ace
The Trillion Dollar Trick: Schiff

Petition for Repeal of NY Gun Ban Gets 40,000 Signatures In One Day: MenRec
‘Used Up, Thrown Away’: Obama Campaign Staffers Receiving Shabby Post-Election Treatment: BizzyBlog
Schiff: Congress Can't Fix The Post Office, How Will They The Fix Deficit?: CNBC

60% of Young Americans Plan to Own Firearms: Nice Deb
Map of 10 Vulnerable Democrat Seats for 2014: Sooper
How President Obama’s executive orders on guns might doom a big bill: WaPo

Image: Conservatoons
Today's Larwyn's Linx sponsored by: Petition for Repeal of NY Gun Ban Gets 40,000 Signatures In One Day

QOTD: "Of course prosecuting Mr. Gregory would have been sad and — on many levels — absurd, but so is the law under which he would have been prosecuted. In fact, if absurdity were a defense to prosecutions or other adverse legal actions, an enormous swathe of our regulatory state would be swept away. Can we even speak of the rule of law as a meaningful concept when we combine an explosive regulatory state with near-absolute prosecutorial discretion?" --David French

We have a tie for today's top negative link, also called "The Worst Link in the World." Both go again to Business Insider and are follow-ups to previous worsts.

1. There's Growing Talk That The Debt Ceiling Is No Longer The Biggest Threat To The US Economy ...

This is written by Joe Weisenthal, further cementing the reputation as the worst liberal hack in the business.

"The only way I see you still having a job at BI is if you are the spoiled son of the owner or you are black mailing (or are the boy toy of) your boss. If it is not some nonsense economical post it is pictures of Hussein Obama that makes me throw up. That is your tool box. Not one article that is either not 100% biased or not 99% nonsense. Amazing."

2. CALIFORNIA: Home To 8 Of The 10 Hottest Up-And-Coming Neighborhoods In America

Author Rob Wile once again promotes "California is back!"--just as in his dishonorable post of earlier this week.

For another take on California, see Gizmodo: "Stupid California Cost Itself $600 Million Over Stupid Facebook IPO".

For saying that the deficit is not a problem and that blue state California is back into solvency, two Business Insider articles tie for The Worst Link in the World.

Barry, any post by Tommy Cristopher at Mediaite or the loathsome Joe "Trotsky" Weisenthal could easily qualify for negative link o' the day!