An invitation-only, closed-door "summit conference" was held in November in which 50 CEO-level newspaper execs pondered methods to revive their business models. 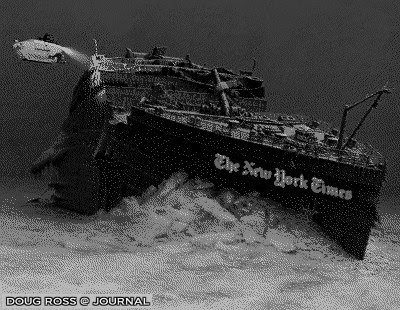 Some observers believe that they were just rearranging deck chairs after hitting the Internet iceberg.

Over at Publishing 2.0, Scott Karp quotes Seth Godin's mantra ("THe Market and the Internet Don't Care If You Make Money") and maps it to the dying newspaper industry.

First, one of Godin's key graphs:

The market doesn’t care a whit about maintaining your industry. The lesson from Napster and iTunes is that there’s even MORE music than there was before. What got hurt was Tower and the guys in the suits and the unlimited budgets for groupies and drugs. The music will keep coming. Same thing is true with books.

Next, Karp translates for newspaper execs.

When I read this, I thought immediately of many assumptions the newspaper industry is making as the decline of its business model accelerates:

But the reality is that all of these assumptions may be wrong.

Why? Because the web and the market don’t care. The web is the most disruptive force in the history of media, by many orders of magnitude, destroying every assumption on which traditional media businesses are based.... But the market should care, you say. What would happen if we didn’t have the newspapers playing their Fourth Estate watch dog role? (Ed: Heh.)

Here’s the bitter truth — the feared loss of civic value is not the basis for a BUSINESS... The problem with the newspaper industry, as with the music industry before it, is the sense of ENTITLEMENT. What we do is valuable. Therefore we have the right to make money...

Karp goes on to assert that legacy media companies simply can't create a viable business model for news and journalism by themselves.

Instead, he believes they'll have to collaborate and build a "giant network of much smaller pieces", which will be loosely affiliated.

Karp doesn't think too many folks will listen.

...the media company executives who read this blog will shrug and go back to trying to figure how to prop up their monopolies... And those monopolies will continue to crumble faster every day.

Of course, it doesn't help that many Americans believe that the media is flat-out lying to them each and every day.