Moi? They came after Moi'?

Huffington Matters and Media Post, two of the finest websites that George Soros' money can buy, coordinated twin hit pieces this afternoon. Timed within minutes of one another, PuffHo and MediaShmatters alleged that the Dealergate fiasco was the concoction of the "right-wing blogosphere" (by the way, George, I'm a centrist).

Here's MediaMutters (all emphases mine):

Right-wing blogger who concocted phony Dealergate story is back with new anti-Obama conspiracy (And Michelle Malkin loves it!) 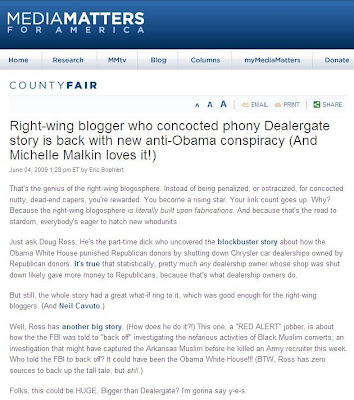 Just ask Doug Ross. He's the part-time dick [Ed: Gold, Georgie, that's comedy gold!] who uncovered the blockbuster story about how the Obama White House punished Republican donors by shutting down Chrysler car dealerships owned by Republican donors. It's true that statistically, pretty much any dealership owner whose shop was shut down likely gave more money to Republicans, because that's what dealership owners do.

But still, the whole story had a great what-if ring to it, which was good enough for the right-wing bloggers. (And Neil Cavuto.)

Well, Ross has another big story. (How does he do it?!) This one, a "RED ALERT" jobber, is about how the the FBI was told to "back off" investigating the nefarious activities of Black Muslim converts; an investigation that might have detained the Arkansas gunman--and Muslim convert--before he allegedly killed an Army recruiter this week. Who told the FBI to back off? It could have been the Obama White House!!! (BTW, Ross has zero sources to back up the tall tale, but still.)

Stratfor, of course, is one of the best known intelligence and forecasting firms in the world. As of this moment on Google News, Stratfor analysis is referenced by the Kuwait Times, the UN Dispatch, IndyMedia, The Tehran Times, Investment News, the News of Australia, the Business Standard, Daily Kos, Forbes, the Brisbane Times, the Seattle Times, Time Magazine, the Associated Press, the Wall Street Journal, the New Zealand Herald, Asia Times, the Denver Post, the Malaysia Star, and many, many more.

The first five words of the post mentioned the source... and Media Matters got it wrong.

As for the Stuffington Roast, senior conservative blog watcher and Media Matters UberGruppenFuhrer Terry Krepel decided to call Dealergate dead. A fantasy hatched by the right-wing blogosphere. A fairy tale. 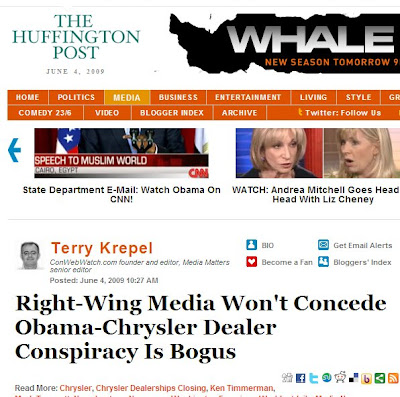 Right-wing bloggers were abuzz last week with news of its conspiracy du jour -- that the Obama administration is deliberately targeting Chrysler dealers for closure whose owners have donated to Republican candidates.

Loath to ignore any opportunity to smear President Obama, the right-wing media were quick to jump on the conspiracy. But even as they reported evidence that debunked the claim, they clung to it anyway.

Newsmax's Ken Timmerman appeared to embrace the conspiracy in a May 27 article -- "Many of the closed dealers were also major donors to Republican candidates and political action committees, a review of campaign finance data from the Federal Election Commission shows"...

Pity Terry doesn't get out much. He might have noticed this perfectly timed Zero Hedge post by Tyler Durden.

Durden reviewed the sworn declarations of dealers at today's bankruptcy hearing. Almost all of the dealers were compliant with Chrysler's strategic Alpha and Genesis initiatives (combining various brands into a single store); furthermore, most of the dealers had significantly above average sales performance and customers satisfaction ratings.

One particular declaration caught my eye, that of Ethel L. Cook, a dealer based in downtown Little Rock, a town near and dear to the former resident. I believe readers can draw their own conclusions based on Mr. Cook's sworn testimony (highlights mine).

On May 13, 2009, I received a letter from Chrysler notifying the Dealership that Chrysler had elected to “reject” our Dealer Agreement. I am obviously very familiar with the Little Rock, Arkansas dealer network and was surprised because both Cook and Crain, the only Chrysler dealers in Little Rock, were both rejected. Therefore, Chrysler’s action would, on its face, result in a complete lack of representation in a major American city. Since that would be a ludicrous result, one can only infer that Chrysler has a more sinister motive. 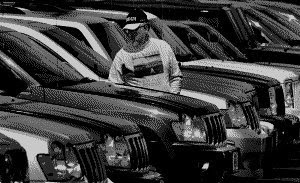 Because it is inconceivable that Chrysler will not have a dealership in Little Rock going forward, the only conclusion that one could draw is that, after review, the evidence in other markets in the region, that Chrysler now intends to “give” the Little Rock market to a Landers-related dealer.

Having reviewed the pattern of assumption and rejection of dealers throughout their region, I have detected a pattern: In every market where there is a dealership connected with former Penske Automotive executive Steve Landers, or his new automotive partnership with “Mac” McLarty (former Chief of Staff for President Clinton) and Robert L. Johnson (majority owner of the Charlotte Bobcats), the competitors are rejected.

In the Little Rock, Landers Chrysler Dodge Jeep is located far out of town in Benton, Arkansas. Nevertheless, the two Little Rock dealers, Cook and Crain were rejected.

Favoritism and cronyism towards preferred dealer group is not a valid exercise of business judgment.

Of course, this aligns almost precisely with the findings that Joey Smith and I championed.

Media Fatters and The Gruffington Host really should ask Papa Soros for a new workstation and an upgrade from dial-up. This kind of thing is an all-too-familiar embarrassment for the sultans of sophistry.