Reports that U.S. tech giants are siphoning the private data of their users off to the federal government have vast implications not only for the nation's citizens, but ultimately for the global reach of the businesses themselves.

The NSA's PRISM program is drawing outrage for invading the privacy of U.S. citizens, but that's not the only cause for concern now that it's come to light. "Access to information by the U.S. government on any communications platform can kill sales outside of the U.S.," noted tech analyst Rob Enderle. "That's one of the reasons we can't sell a telecom switch in most countries, for instance." 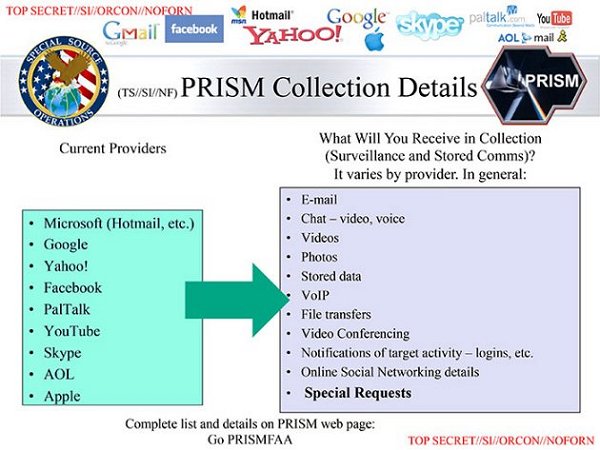 Technology firms in the United States might be impacted adversely by the National Security Agency's controversial PRISM program.

Classified documents about the program leaked to The Washington Post and The Guardian indicate that major U.S. high-tech companies -- including Microsoft, Google, Apple, Yahoo and Skype (now owned by Microsoft) -- provide it data. This data is the major source of raw intelligence for the NSA's analytical reports, according to the agency.

The leaked documents indicate that 98 percent of the data collected by PRISM comes from Google, Yahoo and Microsoft... All three, along with other technology companies, have denied involvement. 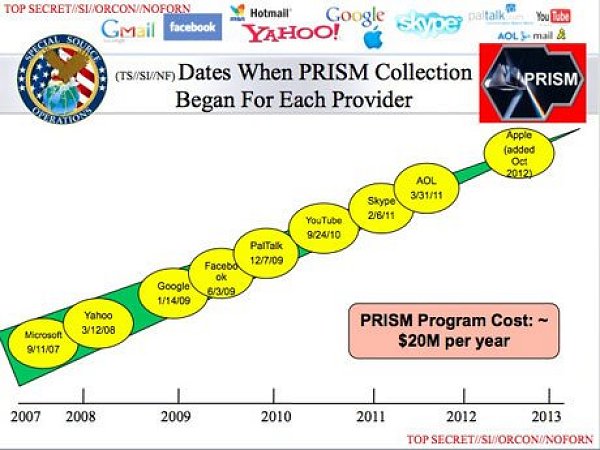 "We do not provide any government organization with direct access to Facebook servers," Joe Sullivan, chief security officer at Facebook, told TechNewsWorld... When the company receives requests for information about specific individuals, it scrutinizes them carefully and provides information "only to the extent required by law," he said.

That's pretty much the party line for all the companies named.

It's possible that tech companies may lose revenue as a consequence of their participation with PRISM.

"Access to information by the U.S. government on any communications platform can kill sales for that platform outside of the U.S.," Rob Enderle, principal analyst at the Enderle Group, told TechNewsWorld. "That's one of the reasons we can't sell a telecom switch in most countries, for instance."

...Claims by Microsoft, Google, Yahoo and other companies that they are not working with PRISM could be correct, because the program "can go right around tech companies and pull data from network providers like Verizon, and it's supported by U.S. domestic laws," Enderle said.

In fact, Google's Larry Page and Facebook's Mark Zuckerberg have both adamantly denied any knowledge of the program.

The problem, according to Zero Hedge's Tyler Durden, is "they are all lying".

The companies that negotiated with the government include Google, which owns YouTube; Microsoft, which owns Hotmail and Skype; Yahoo; Facebook; AOL; Apple; and Paltalk, according to one of the people briefed on the discussions. The companies were legally required to share the data under the Foreign Intelligence Surveillance Act. People briefed on the discussions spoke on the condition of anonymity because they are prohibited by law from discussing the content of FISA requests or even acknowledging their existence...

...Tech companies might have also denied knowledge of the full scope of cooperation with national security officials because employees whose job it is to comply with FISA requests are not allowed to discuss the details even with others at the company, and in some cases have national security clearance, according to both a former senior government official and a lawyer representing a technology company... 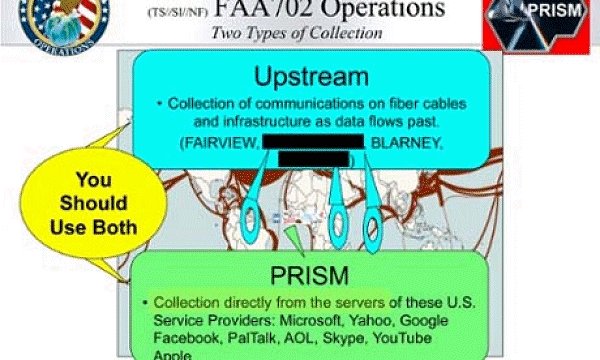 Essentially, the slide suggests that the NSA also collects some information under FAA702 from cable intercepts, but that process is distinct from Prism... Analysts are encouraged to use both techniques of data gathering...

"You Should Use Both." You know: just in case only one is insufficient to make a mockery of all personal rights and civil liberties.

Reporter Glenn Greenwald told CNN's Piers Morgan on Thursday that the Obama administration has bullied and intimidated journalists that had intended to go public with information about PRISM.

Greenwald jump-started Thursday’s discussion over civil liberties and government surveillance with a report late Wednesday night that detailed the NSA’s collection of data from millions of Americans’ phone records.

“It’s well past time that we have a debate about whether that’s the kind of country and world in which we want to live,” Greenwald said on CNN. “We haven’t had that debate because it’s all done in secrecy and the Obama administration has been very aggressive about bullying and threatening anybody who thinks about exposing it or writing about it or even doing journalism about it. It’s well past time that that come to an end.”

In retrospect, it is sad what a farce this country has become: artificial market, centrally-planned economy, pervasive spying on the people, a tax collector that target political enemies, an administration that openly lies under oath...

If we didn't know better we would say this was 1955 Stalingrad, although Stalingrad at the height of totalitarianism was for amateurs. This is next level sh**: "Firsthand experience with these systems, and horror at their capabilities, is what drove a career intelligence officer to provide PowerPoint slides about PRISM and supporting materials to The Washington Post in order to expose what he believes to be a gross intrusion on privacy. 'They quite literally can watch your ideas form as you type,' the officer said.

Compared to Obama, Nixon was an Eagle Scout.

A scandal like this could literally kill cloud computing as a viable, profit making business...

...fortunately, we are going to be forced to embrace it, whether we like it or not.

Think of "cloud computing" as IT's version of "Cash for Clunkers", or maybe "ObamaCare".