If the reports are true -- and they certainly appear to be -- Obamagate is 100 times bigger than Watergate.

In short, a sitting president wiretapped the nominee of the opposition party, before the election, using the security apparatus of the federal government.

A timeline provided by Joel B. Pollak says it all: 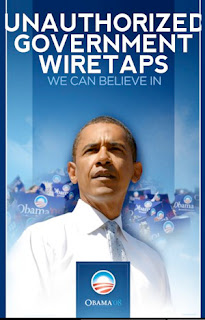 ...October: FISA request. The Obama administration submits a new, narrow request to the FISA court, now focused on a computer server in Trump Tower suspected of links to Russian banks. No evidence is found — but the wiretaps continue, ostensibly for national security reasons...

...January: Obama expands NSA sharing. As Michael Walsh later notes, and as the New York Times reports, the outgoing Obama administration “expanded the power of the National Security Agency to share globally intercepted personal communications with the government’s 16 other intelligence agencies before applying privacy protections.” The new powers, and reduced protections, could make it easier for intelligence on private citizens to be circulated improperly or leaked.

Former federal prosecutor Andrew C. McCarthy summarizes this Orwellian turn of events that is the, by far, the worst of Obama's dozens of criminal activities.


...claim that the Obama Justice Department and the FBI sought FISA warrants against Trump insiders, and potentially against Donald Trump himself, during the last months and weeks of the presidential campaign. It’s an interesting revelation, particularly in light of last fall’s media consternation over “banana republic” tactics against political adversaries, triggered by Trump’s vow to appoint a special prosecutor to investigate serious allegations of criminal misconduct against Hillary Clinton...

...[This may] be an example of what I thought would never actually happen: the government pretextually using its national-security authority to continue a criminal investigation after determining it lacked evidence of crimes...

Now is the time for total warfare.

President Trump must return the favor and directed the investigation of the prior administration including, but not limited to Barack Obama, Hillary Clinton, Eric Holder, and Valerie Jarrett.

Nuke them from orbit.

Nothing will ever happen to the Ex-Liar-In-Chief Hussein Obama, he has the invincible skin color, the untouchable demographic, and a gutless DOJ to boot

Hussein was always a traitor to our nation. His insurgency was engineered by "fellow travelers" since he was at Occidental College. He never should have been allowed to burrow his way to occupy any seat of government - much less 8 years (8 years!!) as "president".
Now there he is with his guardian co-conspirator Jarrett in a walled-in fortress, continuing to carry out his treachery with impunity with his palace satraps and Praetorian guard in the media forming a human shield around him.
In my humble estimation, blast them all to hell, or continue the destruction of this nation.
Vile.

Equal justice for all.