In this particular case, FBI director James Comey is said to have requested that the Justice Department refute the President's claims of unlawful wiretaps.

As the Times itself notes, Comey himself did not deny the existence of the wiretaps, though he is the top law enforcement official in the land and fully equipped to do so.

Oh, and here's a helpful hint for the dopes in Manhattan: no one believes you. 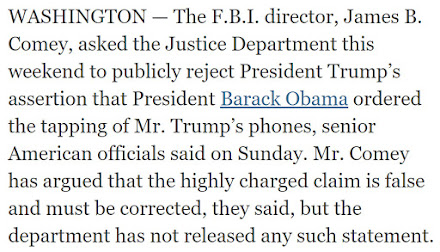 WASHINGTON — The F.B.I. director, James B. Comey, asked the Justice Department this weekend to publicly reject President Trump’s assertion that President Barack Obama ordered the tapping of Mr. Trump’s phones, senior American officials said on Sunday. Mr. Comey has argued that the highly charged claim is false and must be corrected, they said, but the department has not released any such statement.

Mr. Comey, who made the request on Saturday after Mr. Trump leveled his allegation on Twitter, has been working to get the Justice Department to knock down the claim because it falsely insinuates that the F.B.I. broke the law, the officials said.

Mr. Comey’s request is a remarkable rebuke of a sitting president, putting the nation’s top law enforcement official in the position of questioning Mr. Trump’s truthfulness. The confrontation between the two is the most serious consequence of Mr. Trump’s weekend Twitter outburst, and it underscores the dangers of what the president and his aides have unleashed by accusing the former president of a conspiracy to undermine Mr. Trump’s young administration...

...It is not clear why Mr. Comey did not issue the statement himself. He is the most senior law enforcement official who was kept on the job as the Obama administration gave way to the Trump administration. And while the Justice Department applies for intelligence-gathering warrants, the F.B.I. keeps its own set of records and is in position to know whether Mr. Trump’s claims are true. While intelligence officials do not normally discuss the existence or nonexistence of surveillance warrants, no law prevents Mr. Comey from issuing the statement.

The Democrats' refusal to accept that Hillary Clinton lost the election is becoming, before our very eyes, an existential Constitutional crisis. The unelected bureaucracy is now pitted against a duly eelcted President.

We, the American people, must fight this madness using every lawful weapon at our disposal.

"It is not clear why Mr. Comey did not issue the statement himself."

Um...in case he has to testify under oath in the future?

BOOM! The Trump Bump or The Trump Stock Market Surge in updated charts