Today’s “Day Without Women” protests are run by: a Palestinian Terrorist who killed two students; groups who call for the destruction of the State of Israel; and other groups who participate in the anti-Semitic BDS movement

Rasmea Yousef Odeh is one of eight women who organized this particular protest. She’s a woman who spent a decade in an Israeli jail for her involvement in two terrorist bombings made while she was a member of the Popular Front for the Liberation of Palestine (PFLP). One of those attacks, a 1969 bombing of a Jerusalem Super Sol Market killed two Hebrew University Students Edward Joffe and Leon Kanner while they were shopping for groceries.

The Palestinian born Odeh, was sentenced to life in prison for being the ringleader behind the Super Sol bombing as well as the British Consulate in Jerusalem (the bomb was found and disarmed before exploding). After spending ten years in an Israel jail Odeh was released with 77 other terrorists in an exchange with the PFLP for an Israeli soldier captured in Lebanon.

After her release from prison the terrorist eventually moved to the United States where she served as the associate director of the Arab American Action Network in Chicago and later as a Obamacare "Navigator" (snark withheld).

Odeh became a citizen in 2004, but in 2014 she was convicted of lying to the immigration authorities about her Israeli conviction. Odeh checked “no” on immigration and citizenship forms she filled out when asked whether she had ever been convicted of a crime. At the time she was also accused of lying in her immigration papers about her prior residency, falsely claiming that she had lived only in Jordan from 1948 until her application. 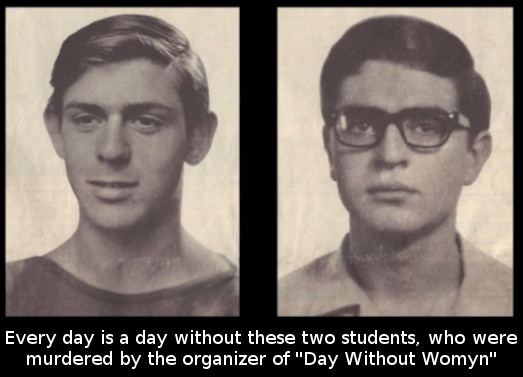 For her immigration crime, Rasmea Yousef Odeh was, sentenced to 18 months in prison, stripped of her citizenship, and considered for deportation. However, Odeh maintains she lied she had post-traumatic stress disorder from the Israeli police sexually torturing and raping her to get a confession.

Website Legal Insurrection presented a report from JTA on March 3, 1969, that only three days after Odeh’s arrest in Israel, the three key perpetrators of the SuperSol bombing — which would have included her — had confessed (emphasis added):

Jerusalem police said today that they had confessions from three suspects directly involved in planting bombs that wrecked the Supersol supermarket in West Jerusalem on Feb. 21, killing two Hebrew University students and injuring nine other persons. About 40 members of the gang responsible for the supermarket blast and subsequent bomb plantings at the British Consulate in East Jerusalem have been arrested. Today police said that all members of the gang were in custody. Police said the bombs were planted by two girls who received the explosives from a third saboteur. They were concealed in shopping bags. The crime has been reconstructed with the aid of the suspects, according to police. Round-ups in East Jerusalem, Ramallah and Nablus uncovered stores of explosives and sabotage equipment amidst indications that it was to have been used shortly….

Additionally, according to Israeli court documents presented by prosecutors in her American trial, Rasmea Yousef Odeh gave a highly-detailed confession on March 1 and 7, 1969, three days after he arrest. This is also inconsistent with her claim that the confessions were the result of multiple weeks of sexual torture.

One of Rasmea Yousef Odeh’s fellow terrorists on the mission, Rasmea Odeh confessed to the attack on Palestinian TV and gave her cousin Rasmea the credit for being the ring leader.

Rasmea Yousef Odeh hasn’t been sitting around doing nothing while awaiting the new trial. On February 6th, she joined other radicals to write a manifesto for the March 8th protest. Her cohorts included Angela Davis, a self-professed communist professor (now retired), who was a member of the original Black Panthers and a 1960s radical icon. Davis was prosecuted and acquitted in 1972 for an armed takeover of a California courtroom that resulted in the murder of a judge. Other co-authors included Maoism supporter Tithi Bhattacharya (Maoists are considered a terrorist group), as well as Linda Martín Alcoff, Cinzia Arruzza, Nancy Fraser, Barbara Ransby, and Keeanga-Yamahtta Taylor in writing a manifesto calling for the protest.

Other participants in the March 8th festivities a rouge’s gallery of anti-Semites and organizations who call for the destruction of Israel.

American Muslims for Palestine (AMP) is perhaps the most troubling of the organizations listed. Jonathan Schanzer, the vice president for research at the Foundation for Defense of Democracies, testified to Congress last year that AMP was founded former members of the Holy Land Foundation, which was shut down after it was found to have been funding the terrorist group Hamas. Salah Sarsour, a current AMP board member, was once jailed in Israel for sending funds to Hamas. (Ironically, Hamas, the terrorist group that rules the Gaza Strip, announced earlier this week that it was cancelling the International Women’s Day holiday.)

AMP is also a leading promoter of the Boycott, Divestment and Sanctions (BDS) campaign targeting Israel, which is both anti-Israel and anti-Semitic. Many leaders of the BDS campaign have publicly affirmed that they seek Israel’s destruction. BDS co-founder Omar Barghouti, an opponent of the two-state solution, said in 2014 that Palestinians have a right to “resistance by any means, including armed resistance,” while leading activist As’ad Abu Khalil acknowledged in 2012 that “the real aim of BDS is to bring down the state of Israel.”

One manifesto for today’s march appeared in the British newspaper, The Guardian, under the headline, “Women of America: we’re going on strike. Join us so Trump will see our power,” the eight women called for a continuation of the “new wave of militant feminist struggle” that began with the protests of January 21st.

The manifesto describes the event as:

“The idea is to mobilize women, including trans women, and all who support them in an international day of struggle – a day of striking, marching, blocking roads, bridges, and squares, abstaining from domestic, care and sex work, boycotting, calling out misogynistic politicians and companies, striking in educational institutions.”

Adding to the “fun,” the Day Without Women,” the protest is being run in conjunction with the International Woman’s Year. International Woman’s Year is a UN based group whose most famous act was at its 1975 conference in Mexico, where it passed the first “Zionism is racism” resolution endorsed by any UN-sponsored group–that set the stage for the infamous United Nations General Assembly Resolution 3379 in 1975 which made the same declaration.

Just announced was the fact that Democrats in congress walked out of the day’s session to join in the “Day without women” festivities leading one to wonder if they just didn’t know it was being run by haters, or they know and don’t care.