The Movimiento Estudiantil Chicano de Aztlán (MEChA), or “Chicano Student Movement,” describes itself as an organization that urges young Chicanos (people of Mexican ancestry living in the United States) to use “higher education” and “political involvement” to promote “cultural and historical pride,” “liberation,” and “self-determination” among their people. In practice, MEChA aggressively promotes anti-Americanism and anti-white hatred by relentlessly stoking the fires of racial and ethnic grievance among Latino students.

MEChA's roots can be traced back to the Chicano Movement of the late 1960s, which emphasized “brown pride” while rejecting “acculturation and assimilation” into the American mainstream. In that milieu, the first National Chicano Youth Liberation Conference, organized by an entity called Crusade for Justice, was held in Denver, Colorado in March 1969. Participants in this conference drafted the basic premises for the “Chicana/Chicano Movement” in a seminal document titled El Plan Espiritual de Aztlán (EPEA), which today is required reading for all members of MEChA's various chapters.

The term “Aztlán” refers to the territory in the Southwestern United States—including California, Arizona, Texas, New Mexico, as well as parts of Nevada, Utah, and Colorado—that Mexico ceded to the United States in 1848 via the Treaty of Guadalupe de Hidalgo. But Mexican separatists consider this region to be part of a mythical Aztec homeland that was stolen from its rightful owners.  Proceeding from that premise, MEChA rejects the notion that any Chicano can be considered an illegal immigrant. A popular slogan that surfaces at many MEChA rallies is: “We didn't cross the border. The border crossed us.” 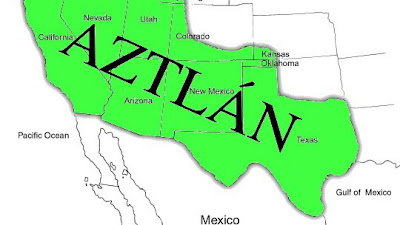 Claiming that “Aztlán belongs to those who plant the seeds, water the fields, and gather the crops and not to the foreign Europeans,” EPEA stipulates that the “Chicanas and Chicanos of Aztlán” are a “sovereign” and “indigenous people” who are “not subject to a foreign culture,” and are now “reclaiming the land of our birth (Chicana/Chicano Nation).”  It sees the “bronze (Chicana/Chicano) Nation” as “a union of free pueblos” whose “cultural values strengthen our identity as La Familia de La Raza.

Following the tenets of EPEA, MEChA denounces “the brutal gringo invasion of our territories,” and it vows to “struggl[e] against the foreigner 'gabacho' [a pejorative term for an English-speaking, non-Hispanic] who exploits our riches and destroys our culture.” MEChA’s exclusionary racial attitudes are summarized in the organization’s slogan: “Por la Raza, todo. Fuera de La Raza, nada.” (“For the race, everything. Outside of the race, nothing.”)

MEChA today espouses what it calls an ideology of “Chicanismo,” wherein Chicano purity is held up as a supreme virtue that reflects “self-respect and pride [in] one's ethnic and cultural background.” The organization seeks to advance a radical ideology by promoting “Chicanismo within the community, politicizing our Raza with an emphasis on indigenous consciousness to continue the struggle for the self-determination of the Chicano people for the purpose of liberating Aztlán.”

MEChA condemns as “race traitors” those Latinos who fail to adhere to its ideological platform. In 1995, for example, Voz Fronteriza, the official publication of UC San Diego’s MEChA chapter, ran an editorial excoriating a recently deceased Latino INS (Immigration and Naturalization Service) agent as one such turncoat. The piece stated that “all the migra [a pejorative term for the INS] pigs should be killed, every single one.”

By supporting continued high levels of Mexican immigration to the United States, MEChA hopes to flood the Southwestern U.S. with enough immigrants to establish a numerical majority and thereby achieve the “reconquista” which would represent the fulfillment of EPEA's credo: “Where we are a majority we will control; where we are a minority we will represent a pressure group; nationally, we represent one party: La Familia de Raza.”

Such a “reconquista” represents only the first phase of  MEChA’s agenda. The next phase involves the ethnic cleansing, or expulsion, of Americans of European, African, and Asian descent out of “Aztlán.”

Today MEChA is a leading campus advocacy group for illegal immigrants. The organization supports open borders; government benefits (including the right to vote) for non-citizens; state recognition of Spanish as an official language of the U.S.; racial preferences and set-asides for Hispanics in education and corporate hiring; taxpayer-funded welfare outlays and public education for illegal aliens; and ultimately, amnesty or a path-to-citizenship for illegals.

MEChA attributes most of the problems presently afflicting Chicanos in America to the nation's allegedly ubiquitous racism. For example, the organization says: “Overall, Chicana/Chicano junior high, high school and college pushout rates have risen since 1969, forcing many Chicanas and Chicanos to a life of poverty. These factors along with a growing right wing trend in the nation are combining to work greater hardships on Chicanas and Chicanos. New repressive and racist immigration laws are continuously directed at our Gente [People].” To address these trends, MEChA is “committed to ending the cultural tyranny suffered at the hands of institutional and systematic discrimination that holds our Gente captive,” and to put an “end to oppression and exploitation of the Chicano/Chicana community.”

Its violent language about America’s alleged anti Hispanic bigotry has made MEChA a potent force on school campuses nationwide: the organization boasts hundreds of chapters in universities across the United States. It has also established a number of chapters in public high schools, routinely encouraging its young supporters to participate in political protests and marches. Like so many of its comrades on the left, MEChA has become expert in dressing up its own vile racism as a commitment to a nebulous something-or-other called “social justice.”
Read more at FrontpageMag.com.