THE SCIENCE IS SETTLED: Where Democrats Rule, Citizens Flee

United Van Lines reported Tuesday that nearly two-thirds of the moves involving New York households were outbound, a higher proportion than any other state except New Jersey and Illinois.  The 2016 National Movers Study by Fenton, Missouri-based United also found that almost 59 percent of the moves within the eastern United States were outbound.  Where were people moving?  Mostly to western states and the Carolinas...  South Dakota had the highest share of inbound moves, at 68 percent.

That exodus pattern isn't limited to the listed states, either.  It's broadly endemic to states where liberals govern.

According to economist Stephen Moore, who co-authored the latest annual edition of "Rich States, Poor States," every single one of the ten most liberal states as measured by voting behavior suffered population losses over the last decade: 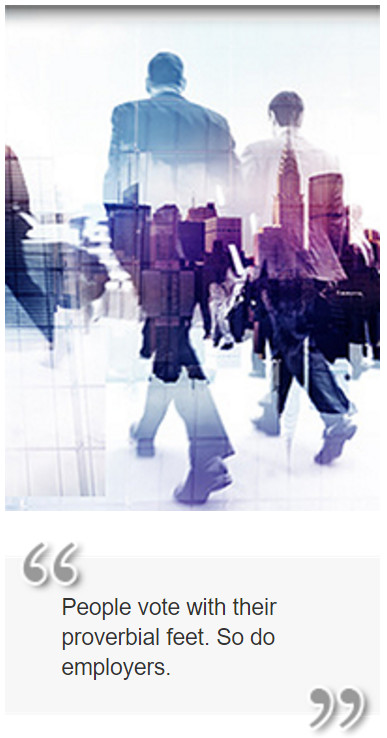 At the other end of the spectrum, what happened to the ten most conservative states as measured by voting patterns in the 2016 presidential election?  Moore notes that every single one of them gained in net population over the past decade.

Employment data tells the same story as population patterns.  According to the report, the most conservative states also enjoyed a job creation rate approximately twice as high as the most liberal states.

Liberals and conservatives can debate policy preferences ad infinitum, but the real-world evidence from America's 50 individual laboratories of democracy produces an unequivocal verdict.

People vote with their proverbial feet.  So do employers.

Stubborn liberals may attempt various forms of rationalization, but it's impossible to dismiss these patterns as statistical coincidence.  Nor does climate and migration to sunnier states explain the data, as no state enjoys better weather than California, while few states endure a more difficult climate than Wyoming.  The facts and numbers speak for themselves.

Nor are these left-versus-right realities confined to the United States.  Global migration, including from those alleged Scandinavian socialist paradises, reveal the same patterns.

Take Sweden.  According to the left-leaning Pew Research Center, 50,000 Swedes migrated to America between 1990 and 2015, compared to 20,000 Americans who moved to Sweden.  Considering that Sweden's total population is just 10 million compared to 290 million in the United States, adjusting that to per capita numbers makes the disparity even more stark.

What about Canada, the country to which so many leftist celebrities swore they'd relocate if Donald Trump became president?  There are 840,000 Canadians who moved to America since 1990, versus just 340,000 Americans who moved there during that same period.

Obviously, that's just the cream of the socialist crop.

Socialist laboratories like Venezuela, Cuba and North Korea literally kill people attempting to escape their pitiful confines, as did places like East Germany and the Soviet Union before they finally collapsed.

If political leftists were correct about the wisdom and justice of their preferred policies, why do they always face such difficulty retaining people where they govern?

Here in the U.S., one delicious irony is that Donald Trump's election has leftists rediscovering the merits of federalism, even to the extent of openly advocating Brexit-style secession for California and other blue states.  The problem is that they appear committed to redoubling their leftist governing policies, which will only harden their isolation and exacerbate their problems, leading to more stagnation and continued outmigration.

Perhaps the last to leave will at least turn out the lights before departing.

I hope they don't come to Texas and vote Democrat.

Unfortunately many who flee the Democrat run high tax states are like locusts. They invade a more conservative state and begin to swing that state to the left through demands for services that were provided by their former residency and paid for by higher taxes. Examples are Vermont and New Hampshire when during the eighties as the economy began to recover from the Carter years, Residents of Taxachussettes fled north knowing that they could still reasonably commute to a job in their former state yet enjoy living where the government didn't have its hand in your pocket every two minutes. Oregon and Washington are two more examples. When the locusts have finished making their new state of residence as miserable as the old one, they'll move on to repeat the process.

That's what they do though. Leave one cesspool to go to a new place for better opportunities but end up voting same type of policies. It's a disease of the brain.