SPAIN: Still on the Agenda of the Militant Lutherans

“We will recover al-Andalus, Allah willing. Oh dear Andalus! You thought we forgot about you. I swear by Allah we have never forgotten you. No Muslim can forget Córdoba, Toledo or Xàtiva. There are many faithful and sincere Muslims who swear they will return to al-Andalus.” — Islamic State video, January 31, 2016

Muslims are keenly aware that they once controlled most of the Iberian Peninsula, and that it took the Christians 700 years of war, the Reconquista, to recover, kingdom by kingdom, all of that territory. The final victory over the Muslims took place in 1492, when the Kingdom of Granada was won by the Christians. There are now many millions of Muslims all over Europe, in France, Great Britain, Belgium, Germany, the Netherlands, and Scandinavia, always much in the news because of the disruptions that they cause, as they challenge the laws and customs of the Infidels, vacuum up every conceivable welfare-state benefit, repay their benefactors with skyrocketing rates of criminality, and commit acts of terrorism as a useful adjunct to the relentless demographic conquest and stealth jihad inflicted on their unhappy hosts. And Spain, though it does not as yet have as large a Muslim presence as that found elsewhere in Europe. remains quite special in Muslim hearts. 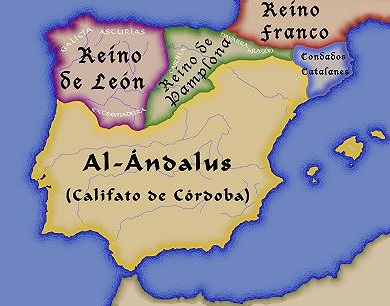 For on the To-Do list of Muslims, the lands that were once part of Dar al-Islam are those that should be the first to be recovered for Muslim rule. As it says in the Qur’an 2:191, “Expel them from wherever they have expelled you.” And for several years, some Muslims in Spain have been conducting a campaign on social media in support of the Islamic State, while the Islamic State, for its part, has continually called for the “return” of Spain to Muslim rule, as in a video it produced in Spanish in which an IS spokesman says: “I say to the entire world as a warning: We are living under the Islamic flag, the Islamic caliphate. We will die for it until we liberate those occupied lands, from Jakarta to Andalusia. And I declare: Spain is the land of our forefathers and we are going to take it back with the power of Allah.”

In 2014 Spain and Portugal offered a “right of return,” that is, a granting of citizenship, to the descendants of Sephardic Jews who had been expelled from the Iberian Peninsula. The two countries were attempting to offer both sorrowful recognition of, and a kind of recompense for, the expulsion of the Jews from Spain in 1492 and from Portugal in 1497. At once Muslim groups demanded that descendants of those Muslims (Moors) expelled from Spain be granted Spanish citizenship. Spanish and Portuguese authorities rejected this demand which, had it been accepted, would no doubt have led to a flooding of Arabs into Spain and Portugal, by the millions, bringing Spain and Portugal much closer to becoming part of Dar al-Islam yet again. The Portuguese lawmaker who drafted the Portuguese law of return firmly replied that “Persecution of Jews was just that, while what happened with the Arabs was part of a conflict [the Reconquista].” Similar statements came from the Spanish, who reminded Muslims that it was they who had settled in and colonized Spain, and they were a military foe who, finally defeated only after 700 years of the Reconquista, were in a far different position than the inoffensive Jews who had lived in Iberia for centuries before Christianity arrived, but had never tried to conquer or colonize it.

This distinction has infuriated the Muslim Arabs of today. They claim that the expulsion of the Muslims was identical to that of the Jews, refusing to recognize the fact that the Jews were never a colonial power, unlike the Muslim Arabs, and that they never posed a military threat to the Christians of Spain and Portugal, again unlike the Muslims. In fact, there was not one but several expulsions of the Muslims, or Moors. The Mudejars were those Muslims who remained in Spain after the Reconquista and who, in the early 16th century, were forbidden the outward practice of Islam. Eventually those among them who converted to Catholicism, or seemed to, were called by another name – Moriscos – and were regarded with suspicion by the Spanish, who did not always trust the sincerity of their conversions, and worried about possible plots by the Moriscos to take Spain back from the Christians. To prevent any such reversal, between 1609 and 1614, in a series of expulsions, the Moriscos were forced out of Spain, with decrees covering the various regions being passed at different dates, and with varying degrees of success. Most of them went to Morocco.

It is on this basis that Muslim Arabs are now demanding their own “right of return” to Spain and Portugal. The flavor of their fury can be tasted in an essay published in the Morocco-based Spanish-language newspaper Correo Diplomático by the Morisco-Moroccan journalist Ahmed Bensalh, who wrote that the “decision to grant Spanish citizenship to the grandchildren of the Hebrews in Spain in the fifteenth and sixteenth centuries, while ignoring the Moriscos, the grandsons of the Muslims, is without doubt, flagrant segregation and unquestionable discrimination, as both communities suffered equally in Spain at that time. The decision could also be considered by the international community to be an historic act of absolute immorality and injustice…This decision is absolutely disgraceful and dishonorable.”

An act of “absolute immorality and injustice”? It was the Muslim Arabs who seized Spain from the Spanish, not the Jews. It was the Muslim Arabs who occupied the Iberian peninsula, and who fought the indigenous Christians tooth and nail to keep them defeated and down. What must the treatment of the Christians in Spain have been like to keep them fighting for 700 years? Certainly there was not that imaginary convivencia in which Karen Armstrong and Maria de Menocal so devoutly believe. Ahmed Bensalh then made a threat to Spain of the or-else variety: “Is Spain aware of what might be assumed when it makes peace with some and not with others? Is Spain aware of what this decision could cost? Has Spain considered that it could jeopardize the massive investments that Muslims have made on its territory? Does Spain have alternatives to the foreign investment from Muslims if they ever decide to move that capital to other destinations due to the discrimination against Muslim?”

Fortunately, neither the threat nor the preposterous claim by the descendants of the Muslim invaders of Spain that they have a moral right to receive Spanish citizenship, has changed Spanish minds. Because if they were to obtain such citizenship, Muslims would indeed stream into Spain.

Al-Andalus remains on Muslim minds and on that To-Do List. Arab tourists flock to southern Spain, to see what they regard as the once-and-future Al-Andalus. At the Alhambra in Grenada, they can take triumphalist satisfaction in the mosque that was built nearby, on the highest ridge in the city, the first mosque to be built in Grenada in 500 years. And with its 45-foot minarets towering over a nunnery next door, the Spanish nuns complain of the call-to-prayer that wakes them too early, and keeps them up too late, and that disrupts the rest of their day, but it is the Muslims who have prevailed.

Spain needs to level that mosque.